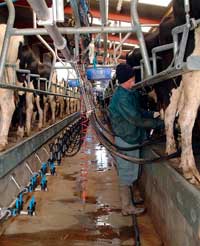 Milk processors, food retailers and the government are being urged to take further steps to ensure the long-term survival of British dairying, as dairy farmers continue to leave the industry and production continues to slide.

Six months after the NFU launched its Survival Plan for British Dairying, Farmers Weekly has carried out its own assessment of the impact it has had so far.

“While most players in the industry appear to have done something to try and prevent the erosion of the supply base, there is undoubtedly further work to be done across the whole sector,” says Farmers Weekly economics editor Philip Clarke.

One of the NFU’s key challenges to milk processors and manufacturers, for example, was to review the contracts they have with farmers, to improve clarity and stability, and offer fairer terms of business. The reaction has been mixed.

“Some processors told us they would be not held against the wall by the NFU or anyone else on this issue,” said Mr Clarke. “But others have taken the opportunity to review their contracts and are drawing up proposals to put to their suppliers in the coming months.”

The FW assessment goes on to applaud processors for work they have done improving their efficiency, but regrets the fact that advertising expenditure on milk and dairy products appears to be on the wane.

Retailers are also applauded for measures they have taken to promote British farm assured dairy produce through widespread adoption of the Red Tractor logo. But doubts remain about the extent to which they still use imported dairy products and the impact that their aggressive price promotions have on the rest of the supply chain.

As for government, there have been some forward steps in terms of tackling TB, reducing the impact of dairy hygiene inspections and increasing public procurement of British dairy produce. “But, as ever with government, they are very small steps, which are unlikely to make any immediate difference to dairy farmers,” says Mr Clarke.

The FW assessment also looks at the steps farmers have taken and suggests that, while they appear to be making greater use of things like benchmarking and knowledge transfer, they could be doing more to contain costs and improve efficiency.

For the full report click here. And why not let us know what you think of the NFU’s Survival Plan by visiting Phil Clarke’s Business Blog and leaving a comment. Has the Survival Plan been a resounding success or a dismal failure?