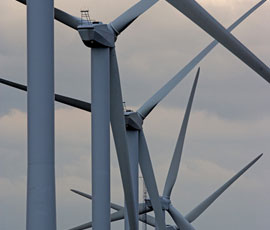 Almost a third of farmers across England and Wales will be involved in some form of renewable energy production, use or supply by summer 2012, a survey has revealed.

The survey, conducted by the NFU in partnership with NatWest bank, found that about one in five farmers would be producing clean electricity by this summer.

It also showed one in six will have installed solar photovoltaic equipment on their farm and a further one in eight will be generating green energy or using energy directly from a renewable source.

The results also showed a higher proportion of farmers in the South of England (20%) and Wales (21%) were using solar PV installations in comparison to the North.

The uptake of wind turbines was about the same across England and Wales with between 5-6% of farmers in each area.

“The NFU has been encouraging farmers and growers nationwide across all sectors to diversify into renewable energy for the past few years – but we are amazed at this level of uptake already.

“The potential of land-based renewable energy to support profitable farming, while contributing to energy security and the low-carbon economy, is evidently much greater than we ever imagined.”

“It also shows how the farming industry is playing a key role in helping the UK meet its target of producing 15% of energy from renewables by 2020.”

But a third of respondents to the survey saw access to finance as a possible issue to getting involved in renewable energy. A quarter felt that access to grid connections and finding the right information were still problems.

And more than half of those surveyed felt that gaining planning permission remained the biggest barrier to renewable energy projects.

Keep up with renewables news on our dedicated page