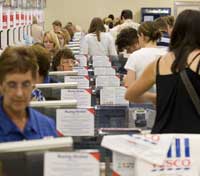 The NFU is alerting the public to the need for a supermarket ombudsman ahead of the deadline for retailers to sign up to the Competition Commission’s proposals.

The Union, along with charity ActionAid, has taken an advert in the national press to explain how an ombudsman is in the best interests of consumers and will not push up the retail price of food.

The full-page advert, in Tuesday’s (26 May) The Times, said consumers were losing out as unreasonable demands placed on farmers and growers across the world meant they product choice was being reduced.

Responsible retailers had nothing to fear from an ombudsman, it added.

The advert comes two days before the deadline for retailers to sign up to the plan.

So far only Waitrose, Marks and Spencer and Aldi have indicated they would be happy for a watchdog to be implemented.

The “big four” of Tesco, Asda, Morrisons and Sainsbury’s, along with Iceland, Somerfield and Lidl have refused to back the scheme.

Meurig Raymond, NFU deputy president, said there was no reason why retailers should not sign up for the creation of an ombudsman.

“A strengthened code of practice proactively policed by an ombudsman will give suppliers great confidence to invest and innovate and lead to a better range of quality products for consumers,” he said.