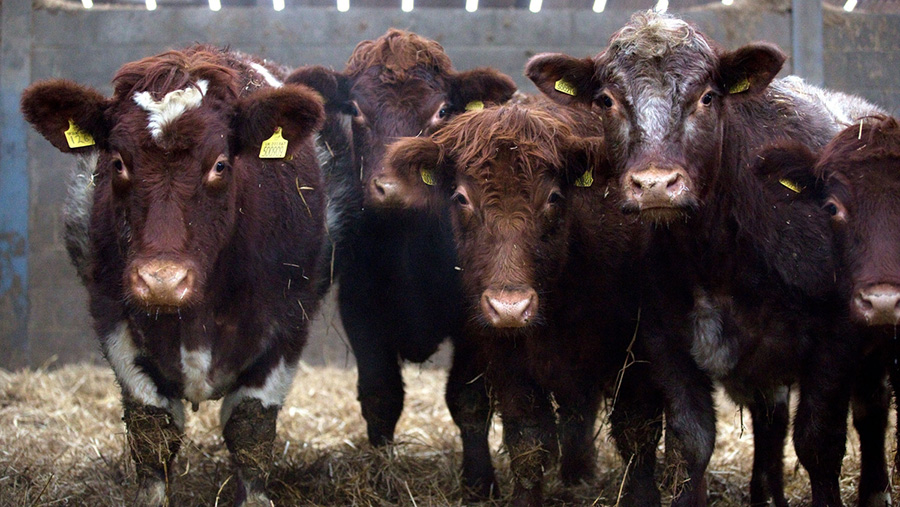 Plunging cattle prices have made Northern Ireland’s beef farmers millions of pounds a week worse off than last year.

Prime values in the first quarter have been more than 45p/kg lower than in 2015, denting producers’ incomes.

The Ulster Farmers’ Union (UFU) has warned beef prices were already not viable and processors were talking the trade down, at the farmers’ expense.

“Losses on this scale are undermining producer confidence and creating uncertainty about what the future holds for family farms,” said UFU beef and lamb chairman Crosby Cleland.

“With direct payments to beef farmers set to drop each year until 2021, processors must realise they will have to pay more for cattle if they want supplies to be maintained.”

Quotes for U-3 grade prime cattle in Northern Ireland ranged from 304p-310p/kg in the week ending 28 March, according to the Livestock and Meat Commission.

In the equivalent week last year, the same grade steers were worth 353p/kg and heifers 349p/kg.

The 18p/kg gap between Northern Ireland and Great Britain prices for R3 steers works out to £61 on a 330kg carcass — though this was smallest difference since last July.

Losses on this scale are undermining producer confidence and creating uncertainty about what the future holds for family farms Crosby Cleland, Ulster Farmers’ Union

Beef prices have dropped across the UK and Ireland in 2016 so far, with sluggish shopper demand and healthy cattle numbers.

AHDB Beef and Lamb expects production to rise over the year, which could further hurt farmers’ returns.

“Unless demand performs better than expected or the exchange rate moves into a significantly more favourable position, farmgate prices could see further decreases as this year progresses,” the levy board said.

Lowland suckler herds in Northern Ireland had an average gross margin of £210 a cow in 2014-15, recent government statistics showed.

Average farm business incomes on the region’s lowland cattle and sheep farms fell 4% on the year to £15,726.

But Northern Irish farmers needed prices between 350p/kg and 360p/kg, or at least closer to mainland levels.

It found that retailers claimed “sustainable economic reasons” for paying Northern Irish producers less, but this was rejected by farmers.

“[Supermarkets] will utterly deny there is a price differential between Northern Ireland and the mainland,” Mr Chesney said.

“That beef is still going on to the same market. They cut prices just because they can.”