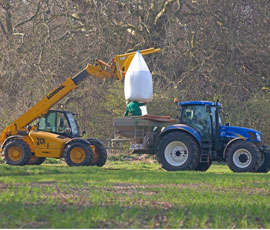 With new season sales standing at only 65-70% of normal and, despite recently suggesting a £4/t increase in ammonium nitrate prices for August, GrowHow has pegged its expected Nitram price rise to a more modest £2/t.

While this reflects present UK demand, it is slightly surprising as ammonium nitrate is in short supply across Europe where prices are higher and at least one significant nitric acid plant has shut down.

The imported price of AN is also on the increase, but with product in store and little movement the UK price is relatively stable.

All indications are that urea prices could increase. India has taken significant tonnages and market observers such as Gleadell note that Latin America and USA have significant volumes yet to buy, potentially firming the market. However, the world is not short of urea and in Britain, as with ammonium nitrate, while the potential market is possibly higher than ever, there is currently less interest than usual in doing business.

There are many theories as to why farmers are not too bothered about buying fertiliser just now; harvest, the weather, even the Olympics have been blamed. But with the seasonal trend being upwards in price it appears price sensitivity in this market is not the issue it was two or three years ago. Perhaps higher prices for grain are the reason for this.

The same is not true for grassland farmers who are hampered by lack of storage and normally buy later anyway. To date, sales of compound fertilisers are even lower than for AN and with milk prices as they are, the potential market size for compound fertiliser is also lower.

UK farmgate prices for P and K have dipped slightly but the long-term trends for these on the global market is upwards.