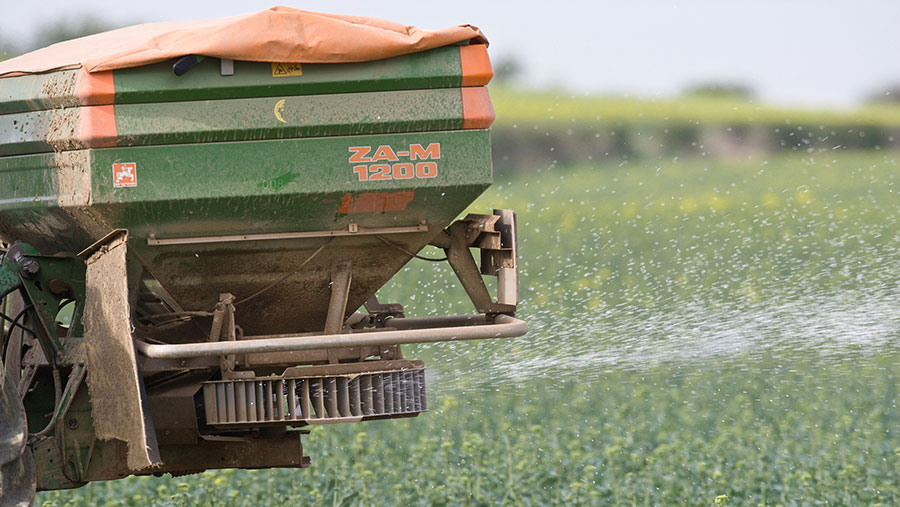 Nitrogen prices have risen as availability of some products tightens and sterling remains weak.

UK manufactured ammonium nitrate (AN) is going on to farm at £246-£248/t for February delivery and March payment.

The fierce competition from CF Fertilisers UK early in the season led many exporters to seek sales in more lucrative markets than the UK, reducing the availability of imported AN and narrowing the price gap between imported and UK-manufactured product.

Imports were down by 50% to the end of December compared with the previous year, said Openfield national fertiliser business manager Graham Colledge.

Strong global demand for urea and slightly restricted availability has pushed prices up generally, with the added impact for UK farmers of weaker sterling.

There is product in the UK, and more of it in the West than the East, but traders are unwilling to commit to importing new urea cargoes this late in the season, so those still looking for large tonnages could be disappointed.

Gleadell Agriculture’s UK fertiliser manager Calum Findlay estimated that 80-85% of business has been booked by farmers in the eastern combinable cropping area.

In the western half of the country, Shropshire-based Wynnstay fertiliser manager Dave Mitchell reckoned about 50% of business was done, with grassland orders only just starting to come through.

While milk prices have risen, dairy and livestock producers were expected to buy as close as possible to the time of use because of cashflow pressure, which means they will have missed out on the keenest prices.

Traders warn that logistics may be an issue again this spring – while about 10% more commitment has been made by farmers, thanks to keen early season pricing, much of the business was secured by CF, which is now faced with organising more deliveries direct to farm than usual.

Phosphate and potash prices have moved little in the past couple of months and availability is good.