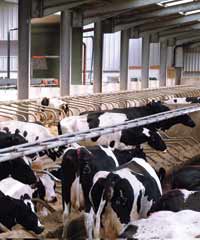 An 8100-cow “super dairy” planned for Lincolnshire is unlikely to get the go-ahead this year, it has emerged.

Nocton Dairies, the company behind the scheme, has withdrawn its planning application to establish the dairy herd south of Lincoln. But it is expected the application will be re-submitted at a later date.

The application was withdrawn after planners at North Kesteven District Council asked the company to address some areas of concern.

It means the dairy is unlikely to start milking this autumn as planned.

Milk output from the £50m farm would have reached 250,000 litres daily should it have been granted the go-ahead.

A decision was expected early next month.

But planners and the Environment Agency are believed to have asked for further details about waste management.

Local residents have raised concerns about noise, smells and slurry disposal. Nocton Parish Council had voted against the super dairy.

But Nocton Dairies had insisted the farm would be largely odourless.

It planned to use an anaerobic digester to separate slurry into odour-free solid and liquid portions before using it as fertiliser.

Animal welfare campaigners, who had mounted a stiff campaign against the farm, will welcome the withdrawal of the planning application.

But Nocton Dairies insisted the withdrawal of the application was not down to opposition or pressure from animal rights activists.

North Kesteven council said complaints on animal welfare grounds would not have been a valid reason for refusing the application.