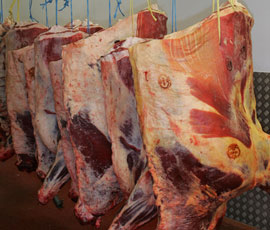 Total cattle numbers in Northern Ireland fell by 2% in the year to June, according to provisional census figures from DARD. The suckler cow herd fell by 3%, to 270,100, while the dairy cow herd declined by 2%, to 279,500.

“These figures are not surprising given the number of cows being slaughtered,” said a report by the Livestock and Meat Commission. “In the 52 weeks ending 29 June 101,102 cows were slaughtered, compared to 88,981 in the previous 52 week period (+13.6%).

“It is likely that this increase in throughput can be attributed to the poor weather last year, affecting cow fertility, and producers opting to cull unproductive stock.”

The number of in-calf heifers entering the suckler herd fell by 10%, to 36,700, while the number of young heifers not yet in-calf fell by 3%. Prime beef numbers were also down, with over two-year olds dropping by 1.8%; one-to-two year-olds up 5% and under six-month-old calves back 9%.