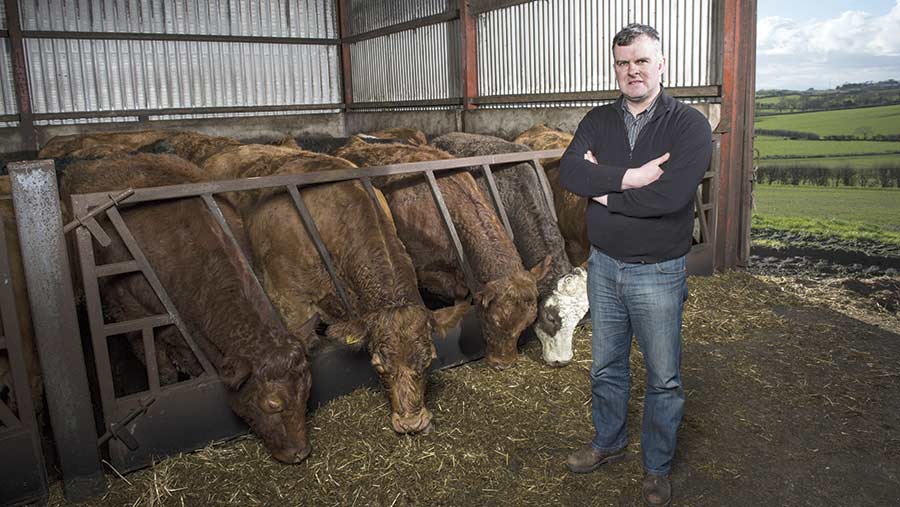 Losses in Northern Ireland’s beef sector have rallied farmers to call for a targeted suckler support scheme after Brexit.

The Ulster Farmers Union (UFU) said the market is failing to provide a living for most suckler farms after industry data showed a 61p/kg shortfall between costs and farmgate beef prices.

Average cost of production for the 2016-17 financial year was £3.97/kg deadweight versus an average price of £3.36/kg, although prices have strengthened to about £3.60/kg.

The figures come from the Livestock and Meat Commission and the Department of Agriculture, Environment and Rural Affairs (Daera), which UFU beef and lamb chairman Sam Chesney said makes for unattractive reading.

The union will pressure Daera to provide a post-Brexit agriculture policy that acknowledges the wider economic, environmental and social importance of the suckler cow, said Mr Chesney.

He called for a scheme that paid farmers to improve technical efficiency in a grass-based system, for carrying out management activities such as:

“We want something simple that gives us money for doing things that will help suckler farms perform better,” he told Farmers Weekly.

“I don’t think the consumer and taxpayer will hand out the brown envelope anymore. Michael Gove has said we must give value for money.

“I want to work to produce a payment of, say, £50 a calf for farms to show they are providing information on the performance and growth of the calf and its breeding and genetics.”

A direct €200/cow subsidy premium is being demanded in the Republic of Ireland (ROI) by key beef industry groups.

One of Mr Chesney’s core concerns is the attractiveness of dairy farming profits to younger, progressive suckler producers.

He said that while it is understandable that some farmers are considering or switching to dairying, it is the suckler cow that is the shop front for beef in Britain.

“Beef is marketed on the back of the suckler cow,” he said, underlining the longer finishing times and smaller carcass weights of dairy-bred cattle compared with beef cattle as issues for the supply chain.

“There are 3,500 beef and sheep farmers in Northern Ireland. If half of us milk 100 cows, this is unsustainable, as it’s an extra 1.75bn litres of milk annually.

“I’m too old to switch to milking cows, but beef farmers have the stock skills, the calving experience and can move into it.”

Beef producer James Taylor, 35, is in the process of converting to a spring-block calving dairy on his holding near Portrush.

Currently calving 100 spring-calving Stabilisers and finishing 800-900 prime cattle a year, Mr Taylor is hoping to treble his profit a cow by switching to dairy.

He told Farmers Weekly that, despite achieving profits of up to £300 a cow, he calculated that an Irish-style dairy system using economic breeding index cows and a mix of Friesian/Jersey cross-breds will make more money.

“In a normal year, I can make more than £200 a cow profit, but dairying should make £900-£1,000 a cow,” said Mr Taylor. “We will stay in the beef industry to a degree, grazing store cattle, but I’m not sure if I will continue finishing them, as the finishing shed is being converted to a cubicle house.

“I like being a suckler farmer and they are a profitable enterprise, but I can’t make them come close to the profits that dairy would.

“There are some suckler herds looking at selling up, but there doesn’t look to be a mass exodus happening. There are numerous examples across Northern and Southern Ireland of arable, sheep and beef farms converting to dairy.”