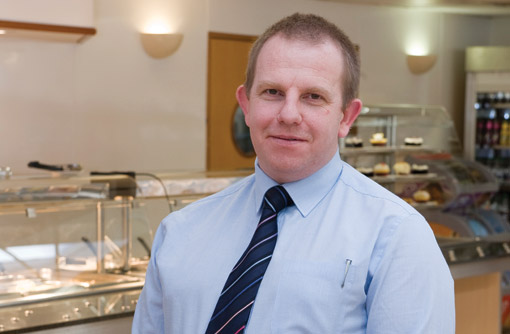 Nottingham University Hospitals Trust is pumping £2m a year into agriculture in the East Midlands and saving taxpayers a small fortune in the process, writes Sue Scott.

Under the guidance of catering manager John Hughes the trust sources more than 90% of its fresh red meat and all of its vegetables, salad and fruit in season from within a 30-mile radius.

“When I went to my existing suppliers and explained what I wanted to do seven years ago, they laughed at me. They said it cannot be done,” says Mr Hughes.

“Of course, it’s harder work to do the right thing,” admits Mr Hughes, who ended the last of the contracts for bought-in ready meals from a food service supplier this year.

“There’s an awful lot of trust involved, but because there are no middle men there are no hidden agendas. It’s all out in the open.”

With 5,000 customers a day, including 1,700 on the acute hospital wards, two restaurants and seven in-house coffee shops on two campuses, plus a meals on wheels service for 450 housebound pensioners starting last month, Mr Hughes has more than enough on his plate without having to worry about negotiating with individual farmers and growers.

So he delegates the job to two suppliers – Owen Taylor butchers of Leabrooks, Derbyshire, and GW Price fresh produce wholesalers of Sheffield – who work alongside the hospital team to find the right producers and co-ordinate ordering and delivery.

Among the hospital’s three dedicated producers of beef, pork and lamb is Redfern House Farm, seven miles from the hospital.

Pig producer Michael Hatton has more reason than most to be grateful for the contract. He was ready to call it a day with the loss of four jobs when Owen Taylor approached him to supply the NHS trust.

“It was a do or die moment. This has enabled us to generate a secure future,” says Mr Hatton, who went from finishing 45 pigs a week to 65, which are all slaughtered at an abattoir 30 minutes away.

“It’s made a difference of £500-600 a week to us,” he says.” It gives me financial stability and we have close contact, so if there is a problem you can talk to your buyer. That’s the big difference.

“It’s a win-win. Everybody gains financially and at the end of the day the patient gets something that’s good value for money. It’s what should be happening all over the country.”

Richard Taylor, managing director at Owen Taylor, agrees. “The hospital contract has more than doubled my businesses and we’ve maintained stability and steady growth for our suppliers. They’re getting more from me than they would be getting from a big slaughterhouse – as much as 5-7% – but it’s still saving Nottingham money and putting them in control.

“If all the trusts moved over to local buying, the farmer would be assured of stability and the trusts would be getting better-quality meals that would give a better service to the patient.”

Mr Hughes, who contributed behind the scenes to James Martin’s recent Operation Hospital Food TV series, says there is no reason why it can’t be done.

“Every trust is an individual business in itself. He dismisses the idea that EU regulations governing public sector tendering squeeze out the little man.

“We always use EU legislation to explain why Britain does not do things,” Mr Hughes says. “In fact, in many European countries they put the local socio-economic impact as an absolute criteria for purchasing. It’s a prime driver for local sourcing 22 miles across the sea.”

“It’s public money. Surely, we should be spending it in such a way as to have a positive local economic impact as opposed to lining the pockets of shareholders,” adds Mr Hughes, who holds a Bronze Catering Mark from the Soil Association and follows the new and currently voluntary government buying standards for food, which he believes could be a catalyst to change all NHS procurement in favour of fresh, local produce.

Cost, he says, is not an excuse. By switching to local suppliers, his bill for fresh meat fell and yet producers still enjoy a premium.

“It’s the middle men who are killing it,” Mr Hughes adds. “There are all sorts of people offering retrospective discounts and the reason they can do it is because there are no national standards tracking behaviour.”

Read more about our Get Better Get British campaign and join our petition for strong government buying standards for hospital foods.