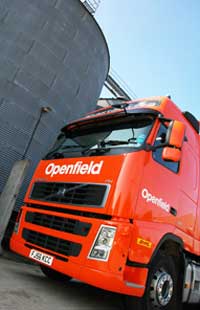 A combination of cost savings and good trading margins has let grain business Openfield deliver healthy profits and dividends to members in its first year of trading.

Company results published on Thursday (18 February) show that the company – formed as a result of the merger of Grainfarmers and Centaur Grain – achieved operating profits of £7.2m on turnover of £557m in the 11 months to June 2009.

This has enabled Openfield to return just over £1m to its 2700 farmer members in dividends, based on the volume of grain traded through the group.

“The £1m dividend is both substantial and significantly earlier than we had planned when formulating the merger,” chairman Richard Beldam explained.

“Furthermore, in view of the good results, we have taken the opportunity to write off all of the expenses of bringing the two businesses together.”

Group operating director Tim Davies said a combination of synergies following the 2008 merger and a good return on grain marketing were behind the results.

“There has been plenty of volatility in the grain markets, which provides opportunities to make good margins if you read it right. Our traders have done just this,” he told Farmers Weekly.

Savings had also been made following the merger, with the senior management team slimmed down and in the logistical operations smartened up. The tie-up with DHL to manage the grain transport operation was one example of this.

The company was also focusing on building secure contracts with leading processors, brands and retailers, such as Warburtons, Weetabix, Coors and Waitrose.

This would let Openfield offer members a wider range of long-term contracts and grain pooling arrangements.