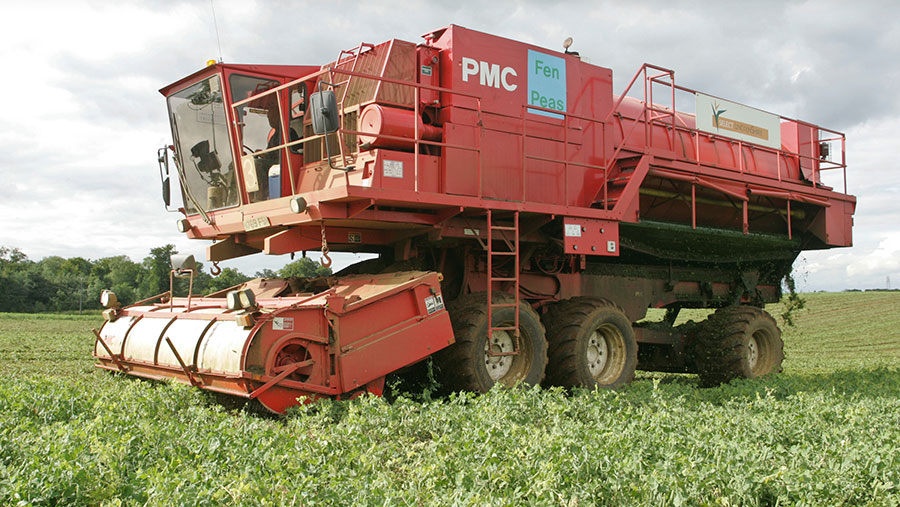 Brexit could offer growers based on the eastern side of the country an opportunity to sell more home-grown peas to UK consumers and grow exports, according to a report by the vining pea industry.

The report highlights that nearly 35,000t of peas are imported into the country on an annual basis, with the most significant volumes coming from Belgium.

However, with rising exchange rates and Brexit potentially making imports more difficult, there is a real opportunity for the UK industry to sell more British peas to British consumers, it says.

Coral Russell of British Peas and Beans, said: “There is a real opportunity to grow the British market in the post-Brexit period and we need to grasp it with both hands.

“There are challenges as well, but I am confident we can face these with the right support from UK governments.”

The industry will need to see productivity gains if it is to win a greater share of the UK market, says the report.

This will be dependent on the ability of the industry to invest in R&D, new varieties, technical innovation and encourage knowledge exchange so growers get access to the best and most up-to-date information.

A potential barrier to this happening is if pea-growing groups which have secured producer organisation (PO) status lose the ability to access grant funding once the UK leaves the EU.

If a similar scheme is not available in the UK after Brexit, UK producers would be at a serious disadvantage compared to their European counterparts in terms of being able to make investments.

The report also acknowledges a reduction in the active ingredients available for crop protection is a key challenge facing the sector.

For example, restrictions have recently been placed on the seed treatment Wakil XL (a co-formulation of metalaxyl M, cymoxonil and fludoxinil), which protects against yield-sapping downy mildew.

Although the product has received a new licence, this restricts the period when Wakil-treated seed can be planted to after 1 April – a date by which many crops have already been drilled.

The report was launched by British Peas and Beans and British Growers at the UK Vining Pea and Bean Industry Conference on 21 November.

UK vining pea production is focused in the east because they are suited to the climatic conditions and because of the proximity to processing facilities.