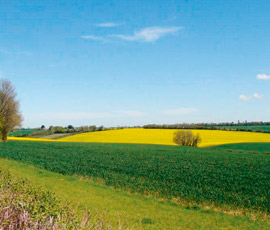 Almost 547ha (1,350 acres) of land is being launched in Kent shortly across three farms and including a substantial arable FBT.

The retirement of tenant Tim Young after more than 40 years of farming in the North Kent Downs brings more than 574 acres of grade 2 and high-end grade 3 land to the market south of Faversham.

Originally from three separate holdings, The Parsonage and Valley farmland is being sold by Mr Young’s landlord in six lots or as a whole through BTF Partnership.

“This is some of the best land in Kent, with very easy working soils and good field sizes,” said Richard Thomas, of BTF Partnership. “There are no buildings or dwellings and so this is likely to be the biggest test of good quality bare arable land in this part of Kent for a number of years.”

Further west, BTF also has a 500-acre five-year farm business tenancy available at Wested Farm near Swanley. This land has mainly grown vegetables and salads and has mains water irrigation from two suppliers.

The grade 2 land is bisected by the M25, includes a two-bedroom bungalow and about 2,000t of grain storage and is capable of growing 4t/acre wheat crops, said Tom French of BTF who has set a 6 July deadline for submission of informal tenders.

Planned for launch next month, BTF also has Chart Stud Farm at Kemsing near Sevenoaks, a 274-acre livestock holding with a three-bedroom farmhouse. The farm is in an Area of Outstanding Natural Beauty and includes a further three-bedroom cottage and a detached four-bedroom house.

Supporting nearly 600 breeding ewes, the land is mainly in permanent pasture (236 acres) with 38 acres of woodland. Chart Stud Farm includes a telecoms mast earning a rental of more than £8,000 a year and will be sold as a whole or in lots. (BTF Partnership 01233 740077)