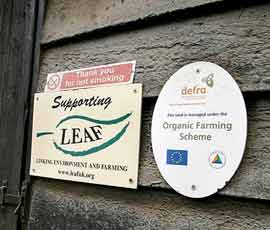 Sales of organic products fell 5.9% to £1.73 billion in 2010, according to research from the Soil Association.

But the Soil Association has claimed that but the rate of decline slowed significantly throughout the year and the outlook for 2011 is cautiously optimistic.

It said the report highlighted positive signs of resilience and recovery for the organic sector overall.

Further key findings in the report include:

* Shoppers spend more than £33 million a week on all things organic, and that 86% of households now buy organic products.

* Dairy products and fresh fruit and vegetables are the most popular categories, accounting for 30.5% and 23.2% of sales respectively.

* Sales of a wide range of products started growing again, including butter, yoghurt, beer and cider, herbs and spices, pulses and packet soups.

* Production of organic vegetables and organic milk both fell in 2010 but cereal production is on the increase, buoyed by high grain prices and strong demand for milling wheat.

* Poultry and egg production are set to fall in 2011 because of a combination of faltering consumer demand, high feed prices and the cost implications of impending changes to the EU organic regulations.

* Organic products continue to attract shoppers from across the social spectrum. Those in the more disadvantaged socio-economic groups account for a third of spending overall.