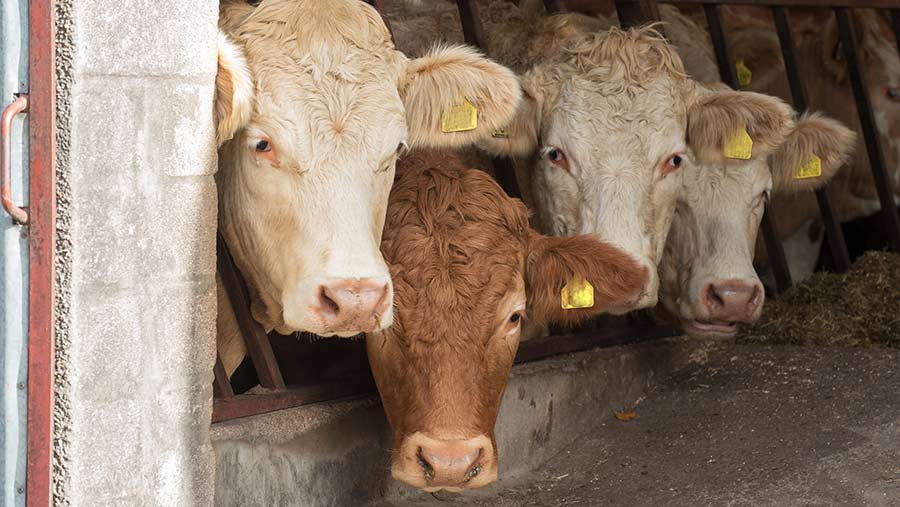 The expected loss of direct support payments after Britain leaves the EU will be a major blow to the beef sector, so never has there been a better time for businesses to ensure they are financially robust enough to survive, says Andersons’ Ben Burton.

Conversely, in Scotland there may be an element of income support (eg, continuing direct payments) and production support (such as the Scottish Beef Calf Scheme), providing some protection for suckler units, he says.

“Finishers may ordinarily default to concentrates or alternative feeds. However, competition from AD plants and unfavourable concentrate prices may discourage throughput and encourage lower finishing weights.

Equally, although finished prices remain historically strong, Mr Burton says further increases are unlikely. But much depends on the outcome of Brexit discussions, which at the time of writing, were ongoing.

Greater political certainty could strengthen the pound, making Irish beef more competitive and applying downward pressure on UK prices, he says. Conversely, difficulties passing Brexit legislation or a “no deal” Brexit may result in the opposite.

Producers need to be aware of longer-term policy and market trends to ensure their business can exploit future opportunities such as environmental support under the Agriculture Bill, new markets and retailer requirements.

The UK remains reliant on imports, especially from Ireland, to meet a significant portion of consumer demand, so any trade agreement that adds cost to imported beef (for example, through tariffs or customs checks) could make imports less competitive, Mr Burton says.

“These political uncertainties may see displacement of traditional supply chains as domestic and foreign purchasers seek to secure product. However, significant domestic price improvements may be limited by exchange rate movements and/or substitution by other meats.”

Brexit could result in increases to imported input costs and possible disruption to supplies, or the supply chain, so contingency planning for key inputs may be prudent.

Regarding exports, nearly 90% of UK beef is EU-bound, and when the UK is outside the EU, the EU may be less motivated in resolving any meat trade issues, such as food scares, or regulation, Mr Burton says.

Longer term, if the UK pursues a cheap food policy through new trade deals, prices could fall. Particular threats include Brazil, Argentina, Australia and a developing hormone-free US beef sector.

“While this may incur additional sector costs, it could differentiate British beef to maintain a price premium.”

Analysts are forecasting cattle numbers to tighten by next summer, in line with calf surveys.

This could be accentuated by a lack of breeding females around the country, with drought, forage shortages and some record cow beef prices leading farms to clear out any passengers.

Health issues will remain very important at industry level in 2019, whether it be living with bTB or seeing more farms vaccinate cattle and enter herd health schemes to control diseases.

Beef farmers will continue to be encouraged to improve management to reduce antibiotics. Ruma goals are set as a 10% or 10mg/PCU (population corrected unit) reduction between 2016 and 2020 and cutting critically important antibiotics by 50%.

Farmers are being urged to record what drugs are being used in their animals. Official figures show a 40% fall in sales since 2013, although much of this has come from pig and poultry sector advances.