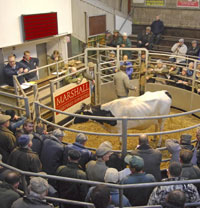 With lowering grain and fuel prices, 2009 could be a good year for beef and sheep producers. But as milk prices are also declining, things aren’t looking so rosy for the diminishing dairy sector.

Although rising costs took the edge off higher returns earned for finished beef and lamb during 2008, at least prices have been rising and remaining relatively steady, a trend likely to be maintained during the coming year. With lower grain prices and cheaper fuel easing the cost burden, the outlook is remarkably rosy.

But dairy farmers face a more unpredictable outlook because the shortfalls of supply ensuring price buoyancy for beef and sheep producers, don’t appear to be bringing the same confidence to dairy producers.

So the mass departure from dairying continues, at the well-publicised and alarming rate of two herds a day. But despite the anticipated shortfall in milk production, dairy farmers are heading into the New Year with a degree of trepidation over the future of the milk price.

Consumers are tightening pockets on the high street and disposable incomes are becoming increasingly stretched, so just how will the weekly food shop be affected? While beef and sheep producers head into 2009 with a degree of confidence, higher prices created by a shortfall in supplies can only be sustained if consumers play their part and accept food will cost more.

The £50-plus lamb won’t be raising eyebrows this year, as the trend for improved prime lamb prices is expected to stay, although talk of the £100 hogget may be wishful thinking.

Bluetongue disease and a trend for reducing numbers in lowland flocks, undoubtedly hit the breeding ewe trade last autumn, an effect compounded by a bad harvest. The knock-on for 2009 has been a further contraction in breeding ewes, having an impact on prime lamb output. Although higher finished lamb prices may encourage those with “floating flocks” to make a renewed commitment to sheep, the prospects for all producers this year look encouraging.

“There just aren’t the sheep about,” says Simon Draper of Rugby Farmers Mart. “A lot of ewes were culled in 2008 and not replaced and while the breeding ewe trade was steady, there were a lot of men taking home far fewer ewes than normal.”

Like other auctioneers, he is expecting 2009 will kick off with a firm hogget trade and predicts there could be more early Easter lambs about this year. “More midlands flocks have put on Suffolk and Texel cross ewes this year to produce smart Beltex-type lambs for the spring market.”

But while beef and dairy producers can’t react as quickly to market forces, the sheep sector could witness an arrest in the decline of ewe numbers if prime lamb prices tempt producers back into business. With grain prices failing to match production costs, a rapid switch-back to sheep could be on the cards, bringing an upturn in breeding ewe prices in the autumn.

Auctioneer Jonathan Evans of Welshpool market, who was selling about 8000 prime lambs up to Christmas, reckons the start of 2009 may see fewer hoggets on offer. “There are still those who traditionally finish big numbers, but a lot of farmers were getting to the end of their lambs before Christmas. I think there’s going to be fewer sheep about in general this year, which should keep prices firm and similar to the levels we saw in 2008.”

Longtown in Cumbria sees about 10,000 prime lambs a week going through the ring -having the UK’s largest throughput. Auctioneer Archie Hamilton says sheep farmers should be confident about prices this year. “A lot of lambs earned an extra £15 apiece more than they did in 2007. I think the higher prices of 2008 will continue, even when we move into the main selling season this year.

“But in reality they’ve got to because producers now need that sort of return on their lambs to make any sort of profit if they can’t make a margin they’ll just get out of sheep and take the single farm payment.”

The 2008 end-of-year clean cattle averages of about £900 being achieved by some markets bodes well for beef producers’ returns for several years to come. But it’s not consumer demand driving values upwards, it’s the shortage of cattle in the system. With imports limited, high numbers of OTMS cows not replaced in suckler herds and a massive shortfall in beef-cross calves from the dairy herd, it’s unlikely anything will happen to bolster clean cattle numbers over the next few years.

Prices for stores and suckled calves – as well as breeding cattle – were up during 2008 and there’s nothing to suggest 2009 values won’t continue to rise. This upward trend will be fired by strong demand for clean cattle as the impact of tighter supplies reverberates down the production chain.

Auctioneer Robert Whitelock of Hexham and Northern Marts reckons beef production is moving into a “stable and, hopefully, profitable era” during 2009. 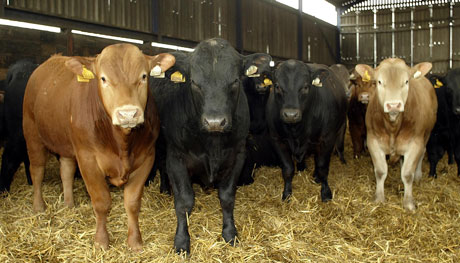 “And it’s looking as though the market will stay like this for at least three or four years, something I hope will encourage more suckler herds to increase cow numbers or at least replace cows that have been taken out.”

All markets report fewer numbers of clean cattle, pushing prices up at the latter end of 2008. The north saw plenty of cattle making 152p/kg, which took their value to more than £1000 a head. Auctioneers expect prices to strengthen further during the year ahead.

The main concern among finishers and the trade is consumer resistance. Forequarter beef has been selling well on the back of resurgence in traditional and lower-priced family meals, as cash-strapped shoppers look to make savings on the weekly food bill. But higher value cuts have been having a difficult time.

What impact all this will have on the “pence per kilo” finishers achieve will gradually emerge as the year unfolds, but provided consumption levels aren’t affected, it looks as though 2009 could be a vintage year for the beef sector.

Three issues are at the core of the year ahead for milk producers – the milk price, the availability of calved heifers and young cows and just how much profit farmers expect they can earn from producing milk.

No one knows the answer to these questions at this early stage of the New Year. But the outcome of any one could tip the balance of an already fragile milk sector. Some indication of milk price stability and an expression of long-term commitment to producers would go a long way to restoring a degree of confidence. But, whatever happens, it still looks like the price of dairy cattle will remain high.

The deepening shortage of dairy stock will continue this year, even though numbers on the market may be marginally helped by an increase in herd dispersals.

Although commercial dairy cattle prices reached new heights during 2008 – with many markets achieving top prices of more than £2000 and averages of £1700 – November saw a “blip” as values dipped by about £200 a head. But it wasn’t sustained and within weeks demand once again moved into top gear taking prices back to their new “norm”. 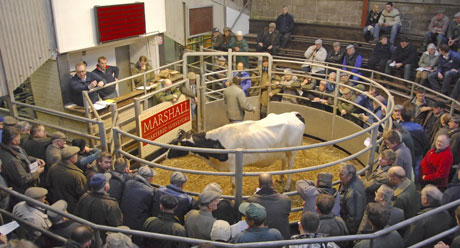 Auctioneer Mark Elliott of Bagshaws summed up the main reason for the higher prices: “The cattle just aren’t there – simple as that.”

He’s been selling about 70 head at Uttoxeter’s special monthly sale of dairy cattle, but knows he could sell far more if he could find them. “Producers have all sorts of concerns about the future of milk production, but a lot of farmers remain committed to milk for the long term. They are staying put and they need cattle. I’m confident demand for in-milk cows will continue to be strong during 2009, with prices staying at least at the current level.”

Derek Biss sells dairy cattle for West Country auctioneers Greenslade Taylor Hunt and while he doesn’t believe there will be a significant further increase in commercial dairy cattle prices this year, he believes trade will remain “strong” throughout 2009.

“Supplies of dairy cattle are extremely tight and prices will continue to reflect that. We have significantly fewer sales booked for 2009. We’d normally have five or six sales booked by the turn of the year and this year we’ve got just two. This may suggest a degree of confidence to stay in milk, but in the short term its’ not helping ease the shortage of cattle.”

All markets selling dairy cattle expect no let-up in demand this year as producers fill every available cubicle in an effort to beat predicted cuts in milk price. The commitment of those determined to stay in milk production and the shortage of dairy stock won’t make 2009 the year when there are many bargains to be had in the dairy ring.