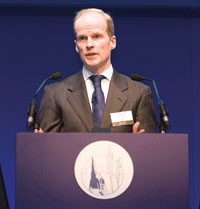 Businesses facing a financial crisis in this recession have only weeks to take action before the vicious spiral of decline gets a grip.

That was the stark warning for delegates at the Oxford Farming Conference from Charles Wilson, chief executive of Booker, the UK’s largest food wholesaler.

Mr Wilson said that in the early 1990s it could take two years for financial distress to take hold in a business, whereas today it can be just two months. He believed this was partly due to computers and better communications and he urged farmers in a crisis to find fast solutions.

“The market forces will be challenging,” he said. “If you find yourself heading into the vicious spiral, act quickly and improve the cash, costs and customer proposition in weeks.”

Booker has had a big turnaround in recent years and now runs 172 wholesale branches with £3.1bn of sales serving caterers, independent retailers and 915 farm shops.

The wholesaler faced a crisis of its own in 2005 with debts of £361m, sales falling at 6% and profits collapsing. By his own admission, the Booker chief said his customers thought it was doing a lousy job, with poor choice, too high prices and terrible service. A new management team set about recovering the business in November 2005.

Mr Wilson described a number of market forces that are affecting business right across the food chain. In the past couple of years, four waves have hit large and small businesses – the banking crisis in July 2007, commodity inflation in November 2007; a decline in consumer spending began in May 2008 and by September 2008 trade credit had started to tighten.

“These waves might cause financial distress where businesses get into a vicious spiral of decline. The decline usually starts with staff getting worried,” he said. “This is soon followed by suppliers, customer demand falls, the funders get worried, sometimes the media pick up the story and then the spiral lunges down again. In this world, a fast response is required”.

Booker’s way out of its crisis was to control cash and costs, revisit the customer experience, introduce a new concept and revise the culture of the company. It spends substantial sums each year now on conducting surveys of 40,000 customers and by responding to their views sales have grown.