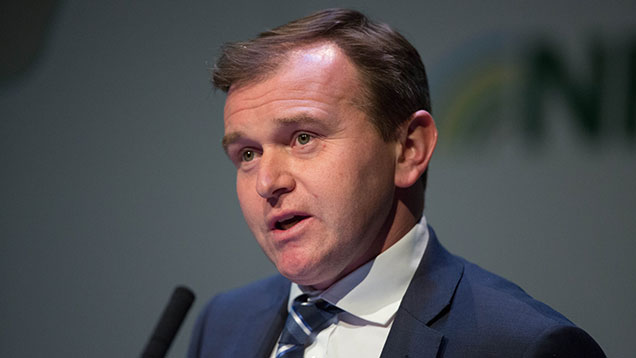 Labour has accused the government of making no assessment of the effect that a withdrawal from the EU would have on British farming.

Responding to a written parliamentary question from Labour, farm minister George Eustice refused to be drawn on the issue.

In the written question, tabled on 24 June, the Labour Party asked Defra secretary Liz Truss “what assessment her department has made of the effect that withdrawal from the EU would have on British farming”.

Farm minister George Eustice answered the question on 1 July, saying: “The government is focused on delivering a successful renegotiation of our relationship with the EU.

“In addition, Defra is making the case for improvement to the Common Agricultural Policy (CAP) so that it is simpler and more effective.”

Ms Eagle added: “Along with the chaos on the Basic Payment Scheme (BPS), the lack of protection for dairy farmers and the abolition of the Agricultural Wages Board (AWB), this is just another in a long line of failures which show the Conservative Party can’t be trusted to stand up for British farmers.”

Last month, Defra secretary Liz Truss refused to answer questions on whether would axe farm subsidies if the UK voted to leave Europe in the in/out EU referendum, due by the end of 2017.

Journalists at the Royal Highland Show repeatedly asked Ms Truss if the Conservative government would maintain some form of farm payment in the event of a UK exit from Europe.

However, the minister avoided answering the question directly. Instead, Ms Truss focused her replies on her commitment to current negotiations on simplifying the CAP and securing a good deal for Britain.

The minister later referred journalists to Defra for a more detailed response.

Farmers Weekly has emailed a list of questions on this issue to Defra, but the department has so far failed to deliver a satisfactory response.