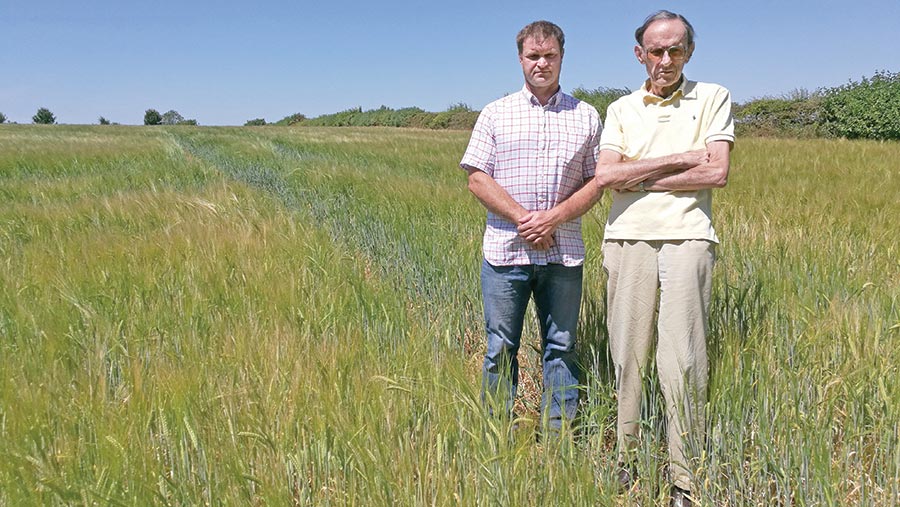 A Gloucestershire farmer has spent a total of 13 hours on the telephone to the Rural Payments Agency (RPA) trying to understand why his basic payment has been unfairly penalised.

Michael Parry, who owns 243ha Roundhill Farm, in Naunton, near Cheltenham, telephoned the RPA helpline in early December, asking if his BPS payment would be delayed following an inspection last July.

The RPA denied that any inspection had actually taken place, despite an inspector spending two days on the farm on 10 and 13 July.

See also: Changing land use – what farmers need to know

He then received a statement dated 4 January 2018 notifying him that about €10,000 (£8,800) had been deducted from his greening payment as a result of “non-compliance” with ecological focus area (EFA) rules. He sent a letter to the RPA to appeal the decision.

Mr Parry telephoned the RPA on numerous occasions to seek an explanation and he said the agency eventually admitted over the phone that they had made an error. “They said they had made a satellite mapping error,” said Mr Parry.

Are you a farmer battling the RPA to receive late BPS payments?
Email: philip.case@reedbusiness.com or call 020 8652 4905.

On 15 January, the RPA emailed Mr Parry and told him there were “no issues” found during the BPS inspection. Two days later, he was sent a copy, unofficially, of the July inspection report, which was not received by the RPA until mid-January.

The report stated incorrectly that the inspection had taken place on 20 August 2017. However, it said Mr Parry’s claim was “fully compliant” and there was no mention of any penalties.

Mr Parry said he telephoned the RPA and they finally agreed that an inspection had taken place in July. But the onus was on him to appeal their error.

He sent the RPA a second appeal letter at the end of January. Neither appeal has ever been acknowledged in writing, only by telephone.

In February, the RPA sent Mr Parry an undated letter informing him that its Complaint Team had been asked to look into his case. The letter states that the RPA will “thoroughly investigate” the issues and come back with “a full response as soon as we can”.

Since February, Mr Parry has not received any communication from the RPA by phone, email or letter.

Mr Parry said: “I have made numerous phone calls to the only available number, but never been able to speak to anyone who knows anything about my case. Having logged over 13 hours on the phone, I have been forced to give up.”

Last week, the RPA said it would allocate “named contacts” to keep unpaid farmers updated until their BPS claims are completed. But Mr Parry has received no such contact.

He added: “it’s ridiculous that farmers can only ring one helpline number. No one will give their direct line or extension number. There are no direct email addresses available.

“You are never able to speak to the same person twice – some will not even give you their name.”

Elsewhere, Worcestershire farmer Stephen Watkins believes the RPA owes him about £46,000 for BPS claims dating back to 2014.

“Someone has decided to take 23 entitlements off me. They said there were 75 errors on my 2017 BPS application,” said Mr Watkins.

“The system is diabolical. You cannot do it properly phoning them up all the time. I want to go into the office, sit down and go through the paperwork with them.

“The RPA have told me I am a ‘priority case’ and they are working on it. No one has been appointed to me.”

Commenting on these cases, NFU vice-president Stuart Roberts said: “These are two examples of many cases we hear about. They are not isolated cases.

“There are mistakes that should not have happened, but the problems should be easy to fix. The communication from the RPA has been atrocious.”

An RPA spokesperson said: “We understand the frustration of farmers. The Rural Payments Agency are working through a range of priorities including the clearance of customers’ queries relating to payment differences.

“There have been specific challenges on mapping and the RPA are working through the additional evidence provided by farmers and land agents.

“The RPA will contact customers when their cases are being reviewed.”

Half of farmers struggle to complete BPS claims, survey finds

Nearly half of NFU members say they struggled to submit their 2018 Basic Payment Scheme applications.

The NFU surveyed 443 of its members on a range of questions about BPS 2018 and communication, behaviour and historical issues.

The results show nearly half of members (48%) struggled to submit their claims with ease. And 27% used the NFU to assist them with their applications, either over the phone or at meetings.

The NFU believes the problems with BPS were magnified this year by erroneous mapping changes, incomplete and often inaccurate hedge data and significant delays in getting assistance over the phone from the Rural Payments Agency (RPA).

As a result, the NFU is urging the RPA to further simplify the BPS application process, increase support to applicants and address ongoing communications failures.