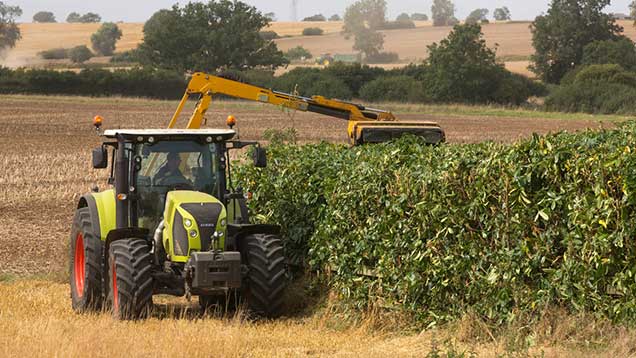 Farmers in England are reminded that they will lose part of their Basic Payment if they cut hedges in August without a written derogation.

As part of the 2014 CAP reform agreement, Defra announced it would extend the hedgecutting ban in England from 1 March to 31 August – a full month longer than farmers were used to.

Growers were told that if they were sowing oilseed rape or temporary grass in August then they could apply for a derogation from the rule, so they could trim affected hedges without driving over the crop.

However, by 28 July the Rural Payments Agency (RPA) said it had only received 895 requests for a derogation, of which 802 had been granted, 22 rejected and 71 returned for further details.

The agency claims requests for approval can be turned around within 15 working days.

Farmers without a written derogation must wait until 1 September before cutting their hedges.

Anyone who makes use of the derogation, and then does not got on to sow OSR or grass during August, will be in breach of the rules and incur a penalty.

Kathryn Lewis of Davis Meade Property Consultants said that the ban on cutting was introduced as part of the updated 2015 cross-compliance requirements.

Farmers should be aware that the statutory ban also included tree cutting and trimming too, she said.

“The ban on hedge cutting to protect birds during the breeding season has been extended by a month into August to cover the main chick-rearing season and is now applicable to trees.

“There are some exceptions, such as if a tree overhangs a highway or road or footpath endangering vehicles, people or horses and riders or is obstructing the view of vehicles.”

A Norfolk farmer, who asked to remain anonymous, told Farmers Weekly he had applied to the RPA for a derogation on 3 July and was still waiting to hear if his request will be approved.

The farmer said he had phoned the RPA on 31 July to ask about progress and was told the application was in the system, but it was yet to be processed.

“The lady told me they would do it as soon as possible, but the need is so imminent. We were warned we must not cut any hedges until we had received permission, but we need it within the next 10 days.

“After waiting three weeks we’ve heard nothing and we don’t know when we will. It is annoying and ludicrous.”