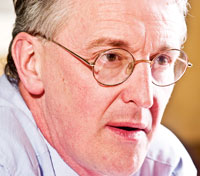 As Farmers Weekly readers will know, I’ve said a number of times over the past year that I want British agriculture to produce as much food as possible, giving consumers what they want and protecting the environment, including the soil and water on which growing food depends.

In his opinion piece last week, Stephen Carr called for a return to a system guaranteeing farmers a price, as the old CAP used to do. Somehow I can’t see any of the successful farmers we honoured at the recent Farmers Weekly Awards wanting to go back to the past.


We need real reform of the CAP to make sure farmers are rewarded by a fair market for what they produce and also financially recognised for the outstanding way in which much of our land is managed.

We’re not going to unpick the CAP health check agreement to phase out milk quotas; if we did, it would simply make it more difficult for British milk to make it into French and German fridges. And who really wants to go back to the bad old days of paying farmers to produce too much and then dumping it all on the world market, so hurting farmers in developing countries, of whom we need more, producing more food.

UK farming is among the most modern and efficient anywhere in the world. That’s because it’s able to respond to the market, and the story of agricultural production in the UK is not all one of doom and gloom.

I know it’s tough in dairy at the moment and, yes, it’s true that we imported 48m litres of milk in 2008 – far less than the 1m litres a day claimed – but we also exported 559m litres. The UK produced 403,000t of fresh fruit in 2008, the highest level for 15 years, and beef production and exports were higher than they were in 1998. And 2008 saw a record wheat harvest – which shows the productive capacity we have when the signals are right – although I know it’s a lot tougher this year.

The question for government is how best to support the industry. At the Royal Show this year I announced a new partnership in which we will work together to recapture the benefits of set-aside. It also showed that I am serious about keeping regulation for where it’s really needed. The Pig Meat Task Force, the Dairy Supply Chain Forum, and the new Fruit and Veg Task Force I announced this week, are all about bringing the industry and government together to work out what each of us can do to help boost production and deal with problems.

By working in this way, we’ve had some real successes, such as the bluetongue vaccination programme and securing changes to sheep EID regulations. On the other hand, I know there are many who think I made the wrong decision on bovine TB, but I took it on the best available evidence. I believe in being straight with people, and I’ve accepted all the recommendations of the TB eradication group.

One thing is certain, however. To feed another 2-3bn people in the next 50 years, the world is going to need a lot of farmers and a lot of agricultural production.

I believe a thriving industry will attract young people whom we want to be the farmers of tomorrow. At the Farmers Weekly Awards, I had the honour of presenting the Farmer of the Year award to Nick Padwick, whose efforts in training his staff and getting children interested in farming are inspirational. A colleague was told by a Welsh hill farmer that the best thing about the improved prices we have seen for lamb over the last year was that it showed his children that there was a worthwhile future for them in the sector.

I’m proud of British farmers. They do a great job, and they’re ready to face future challenges. The truth is we all want a strong, productive, competitive and sustainable industry.

Sometimes we may have different views about the means of achieving it, but that’s when partnership is even more important. Peter Kendall always says that the goal has to be producing more and impacting less, and that’s something we can all agree on.

Tell us what you think of Mr Benn’s response