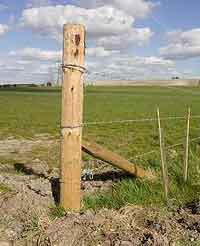 Farmers with unmarked boundaries between fields will have to spend money physically identifying them, the Rural Payments Agency has revealed, in a sudden change to its Rural Land Register mapping update.

However, the agency has now announced that the updated maps it sends farmers will take account of previously agreed boundaries.

Many of the first farmers to receive updated maps had been dismayed to find land parcels lumped together, field numbers changed and boundaries previously agreed with the RPA missing altogether.

The RPA is required by EU rules to map parcels of land to physical boundaries. Where Ordnance Survey maps and aerial photography showed no clear boundary, the RPA mapping software arbitrarily combined these parcels. This meant that many farmers received maps showing they were apparently farming fewer fields – or some of their neighbours’ land – despite agreeing maps with the RPA in 2005 and earlier.

The move follows RPA consultation with industry representatives, including the Central Association of Agricultural Valuers. The CAAV’s Alice Russell-Hare said that if farmers failed to mark out “invisible” boundaries on the ground, they could face problems during RPA inspection.

“We hope the solution reached with the RPA will alleviate this situation. We shall continue to work closely with the RPA and Natural England to ensure the mapping update does not have a detrimental effect on the Single Farm Payment in 2010.”

There was a further risk to Entry Level Stewardship agreements, she added. “Farmers could find their points target may change as a direct result of amalgamation of fields, leading to problems and delays with ELS payments.”

Henry Aubrey Fletcher, president of the Country Land & Business Association, welcomed the RPA’s decision but blamed Brussels’ rules for the problem in the first place.

“The CLA believes the European regulation is unworkable in the UK and needs challenging by government. Not only is it creating additional administrative and practical burdens on land managers and government agencies but it is reinventing the wheel over agreed boundaries.”

Permanent physical boundaries accepted by the RPA include:

Read FW’s guide to dealing with the RPA mapping update and what it means for your farming business.