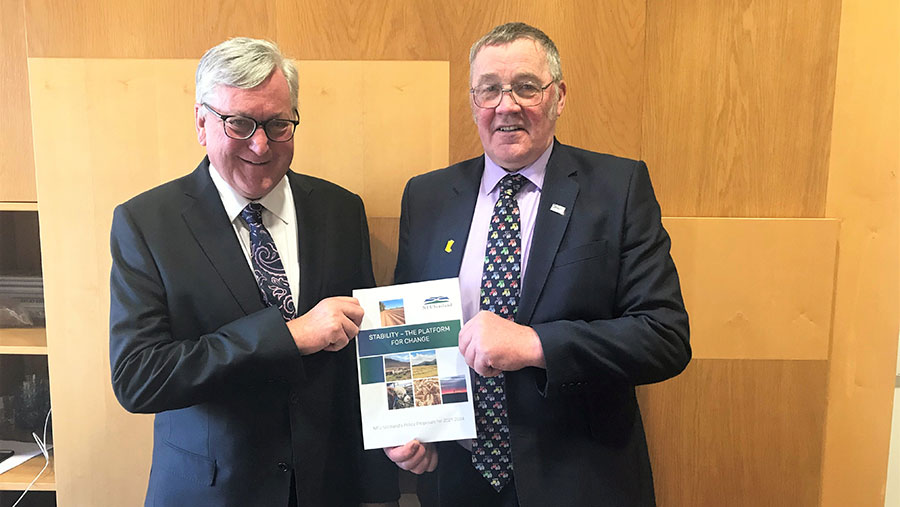 The call forms part of a raft of post-Brexit policy demands for Scotland during the 2021-24 “transition”, which also include scrapping the crop diversification (three-crop) rule and the permanent grassland requirements of the existing CAP.

NFUS believes funding increases of up to £100m more than the current £500m “pot” will also be needed, especially with action to mitigate climate change being central to any future farming policy.

Despite the call for more money, there were signs that Scottish farmers could be pushing at an open door, with Holyrood’s rural economy secretary Fergus Ewing saying there is “common ground” to work on.

Although the union wants the BPS left generally untouched, it has called for improvements to farm mapping requirements, the farm inspection regime and penalty processes.

Launching NFUS’ latest post-Brexit policy document, Stability – The Platform for Change, union president Andrew McCornick suggested the changes in Scotland should happen at a slower pace than in England.

“Let’s not pin ourselves to something hard and fast… we need flexibility,” he said, adding that the proposals were “ambitious”, but deliverable.

To achieve the sector’s aims, pilot schemes on farms to help deliver Scotland’s climate change targets need to be bolstered, he said. For example, the Agricultural Transformation Programme (ATP) announced last month need an increase in the £40m already pledged by the Scottish government.

The union also says a ring-fenced financial framework must be established for Scotland, with at least the same amount of funding as now under both pillars of the CAP.

Although it does not want to go into detail, when the £40m for ATP is taken into account, NFUS thinks a further £60m is needed to deliver its and the Scottish government’s aims.

NFUS will use its Steps for Change policy document, published in March 2018, in negotiations with the Scottish government on future agriculture policy, including financial stability, environmental measures and productivity.

The Agriculture (Retained EU Law and Data) (Scotland) Bill is currently going through the Scottish parliament and will contain the main policies for farming after Brexit.

Updates to existing climate change legislation are expected to be published by the Scottish government next month and could contain arrangements to increase funding for the farming sector.

Launching the document at the Scottish parliament on Tuesday (2 March), Mr McCornick said the proposals for a 2021-24 transition and a post-2024 policy would “future-proof our sector”.

“Both the short- and longer-term proposals recognise Scottish agriculture’s fundamental role in emissions reductions and carbon sequestration, while retaining our ability to profitably produce food to the highest of standards.

“Farmers and crofters must be incentivised to take up fundamental measures focusing on soils, input costs and emissions reduction. It is essential that such actions are taken up by a much wider swathe of Scottish agriculture and that all doing so are appropriately supported.”

“We will particularly look at the proposals around penalties and inspections, as these are two areas our simplification taskforce has already highlighted, and I have committed to making rapid progress on,” he said.

“These proposals show that there is common ground between the Scottish government and NFUS to do all we can to provide stability for farmers and crofters in the critical years ahead.”