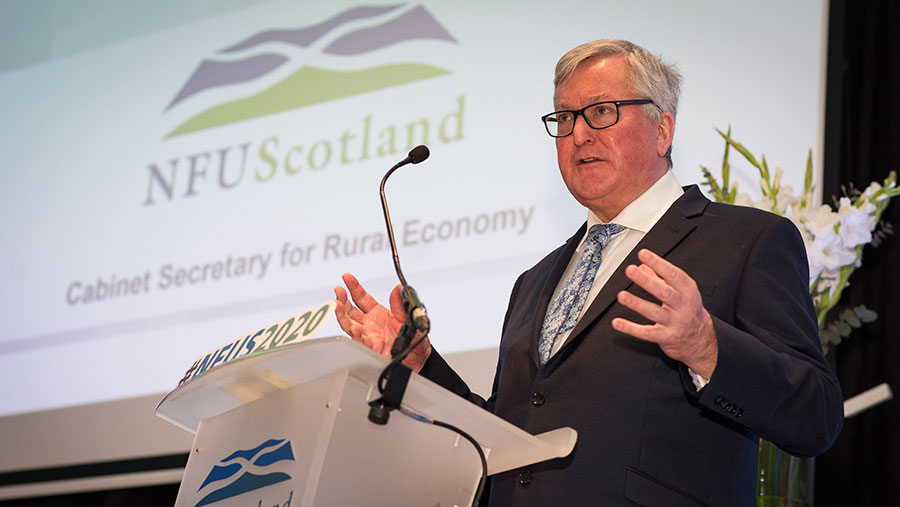 Scottish farmers and crofters are to benefit from £40m of initial government funding to help the industry meet its net-zero carbon ambitions.

The Scottish government unveiled the funding pledge in its budget on Thursday afternoon (6 February).

This additional money is being earmarked under the Agricultural Transformation Programme, which will support the farming industry to undertake a range of actions to reduce greenhouse gas (GHG) emissions and support sustainable farming and land use.

Scottish rural economy secretary Fergus Ewing announced details of how the money will be allocated in an address at NFU Scotland’s annual conference in Glasgow on Friday (7 February).

The broad objectives of the programme will be to:

Mr Ewing told reporters at a press conference that £20m of the money will be made available to farmers as capital grants. The second tranche of £20m will be offered as “financial transactions” to farmers to apply for, especially as loans.

The aim is to start the programme later this year. Mr Ewing said he was “giving farmers notice now”, so they could also start thinking about how they plan to spend their first tranche of  Less Favoured Area Support Scheme money, which is due by the end of March.

Mr Ewing said the Scottish government is committed to working with farmers, adding: “I think they are up for it.”

He added: “The direction of travel is only one way. We will be expecting farmers to farm more sustainably. There is a willingness to do it, provided it is practical and doable.”

The cabinet minister said he had already held discussions with the NFU and its president, Andrew McCornick, about the practicality and deliverability of the programme.

“It’s significant. It’s huge that we get this funding,” Mr McCornick told Mr Ewing, speaking at the NFUS annual conference on Friday (7 February).

“We totally recognise we all have to play a part, whether you are big, small, an arable or a livestock farmer. We are as determined as you to meet these [climate] targets and to make this happen.”

The NFU has set out an ambition for the industry to reach net zero by 2040.