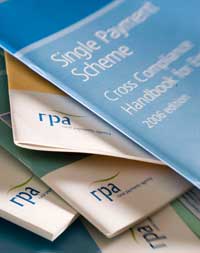 Single farm payment “entitlement statements” are due to be sent out by the Rural Payments Agency in the next few weeks. English farmers are urged to check them closely and notify the authorities immediately if they suspect an error.

“The RPA does not have a great track record in getting things right,” says Richard King of farm business consultants, Andersons. “Even if you were paid the right amount last year, it doesn’t follow that the RPA will get your figures right this year.

“Indeed, there are still some claimants who have never had the right allocation of entitlements – dating right back to 2005. Everything should be checked.”

Mr King says this is even more important this year, as a change in the regulations stemming from the CAP “health check” means that the RPA can, in theory, impose a cut-off date, after which it would not have to amend any errors.

“The legislation says any entitlements allocated to farmers prior to 1 January 2009 ‘shall be deemed to be legal and regular, as from 1 January 2010’,” he explains. “Strictly applied, this might mean that the RPA could institute a cut-off for corrections to entitlement allocations.”

Stakeholders have been in discussion with the RPA to see how claimants can protect themselves, but definitive guidance is said to be sparse.

One improvement this year, however, is that the entitlement statement is being sent out two months earlier than previously, and before the actual SFP is paid. “This gives farmers the chance to check and, if necessary, query things before payments begin,” said Mr King.

The reason that individuals’ 2009 entitlement values can now be calculated is that the English Regional Average Payment rates have been set. This now accounts for 60% of a farmer’s SFP, with just 40% due to the historic element.

“The actual regional average payment also varies according to the number of entitlements claimed in each region, which means the RPA has to work out the rates from scratch each year,” Mr King explained. “This information has only just been made available.”

How to check your 2009 entitlements:

| Take the 2008 euro entitlement value and subtract the 2008 regional element (€141.93 in the English lowland). This gives the historic element within the 2008 entitlement.

| The value in euros will be what appears on the entitlement statement. To see what you will receive in your bank account, convert into Sterling at €1 = £0.90930, and take off the 19% English deduction for modulation.