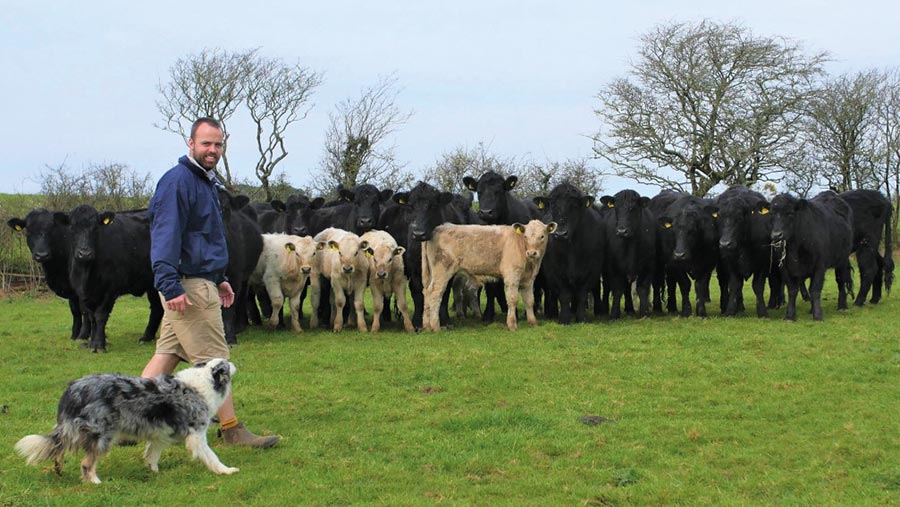 With a mixture of improved land, heathland and Sites of Special Scientific Interest, Mr Oates and his father, Christopher, have refined their practices at Rosuick and Tregoon Farms, Helston, Cornwall, so they are more in tune with the environment and wildlife.

Their whole farming system has been built around the Countryside Stewardship Scheme (CSS), with both higher tier and mid-tier agreements in place.

These schemes provide financial incentives to help farmers look after and improve the environment.

Adopting techniques from the scheme have had the added benefit of providing additional income and reducing labour requirements, they say.

The farm has been organic since 1999, so when the family bought an extra 40ha of conventional land at Tregoon Farm four years ago, they converted it to a long-term organic grazing rotation.

The additional land enabled them to plant 5ha of wild bird seed – with the CSS income similar to renting out that land for flowers or vegetables, which would have damaged the soil.

However, the biggest change the family made was to stop growing any cereals; they went from crimping 8-16ha of barley to nothing in a bid to cut costs, improve soil structure and increase habitats for wildlife.

Instead, they grow more arable silage, which is supported by the CSS.

“The bottom line has improved – we can afford to buy straw instead of grow it because we have so few costs,” says Mr Oates.

In addition, labour is more easily spread throughout the year and they have a simpler quality ration for the cattle. 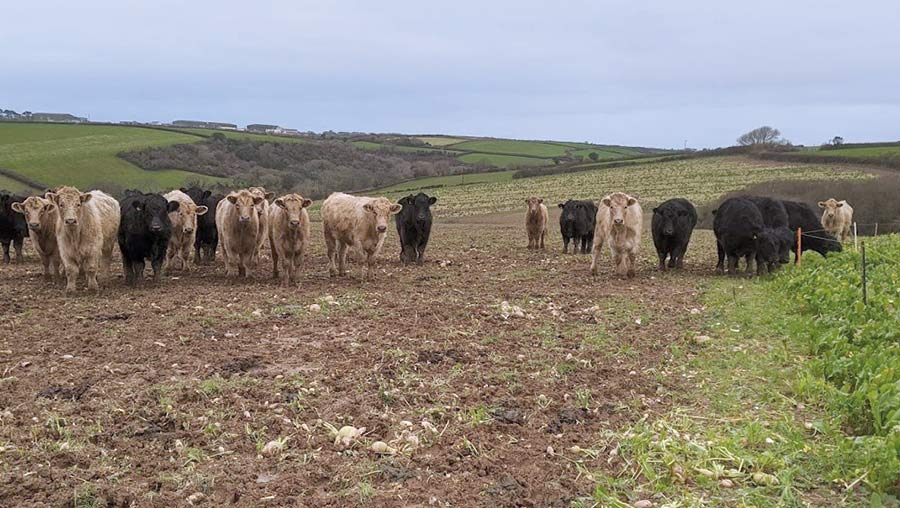 These are strip grazed from mid-November in line with the stewardship agreement.

The livestock also get hay or silage, with no purchased feed bought except for mineral blocks.

This maximises labour efficiency and reduces feed costs; and there’s less manure to spread. Although stock will be housed if necessary.

After the stubble turnips, Mr Oates plants a barley and pea wholecrop in March – early April to act as a habitat and food source for local wildlife.

This also acts as a nurse crop to the heavy white clover mix that is undersown two weeks later.

He ensiles the pea and barley mix in the same clamp as grass silage to keep things simple and avoid spoilage.

There are about 150-200 head of cattle on farm at any one time, and stocking rates are low because of strict scheme requirements.

“In an ideal world, the sheep will follow the cattle [to reduce the worm burden and use all the grass], but it’s not always possible,” says Mr Oates.

For example, some blocks of land (in the SSSI) can only have sheep on, the heathland can only have cattle and other land is saved to make hay.

Grazing heathland provides the mix of open and dense vegetation that birds and wildlife need, while moving the livestock every three to seven days allows leys to recover more quickly.

By dropping the arable rotation, the family no longer pay contractors to power harrow and drill corn – which was having a negative impact on soil structure – or harvest and crimp.

“We have less paperwork and harvest is less stressful because wholecrop is less weather dependent.”

Biodiversity has also improved. A survey conducted last year found a wealth of rare plants on the farm – notably the small flowered catch-fly.

And another big benefit is the flexibility.

“We aren’t tied down to the everyday routine. Our emphasis is to keep costs as low as possible.

“We work hard to keep a good work-life balance. Keeping an eye on the bottom line while being willing to change.

“This has been particularly valuable this year, with the unpredictable impacts of coronavirus,” he adds.

Plans for the future

Although the family had dropped herbal mixtures in favour of longer-lived grasses, this year they are giving them another go, as the deep roots are efficient at drawing nutrients from the soil.

In addition, they sink carbon into the soil, which Mr Oates believes will get them ahead of the game when it comes to the new Environmental Land Management or carbon credit schemes.