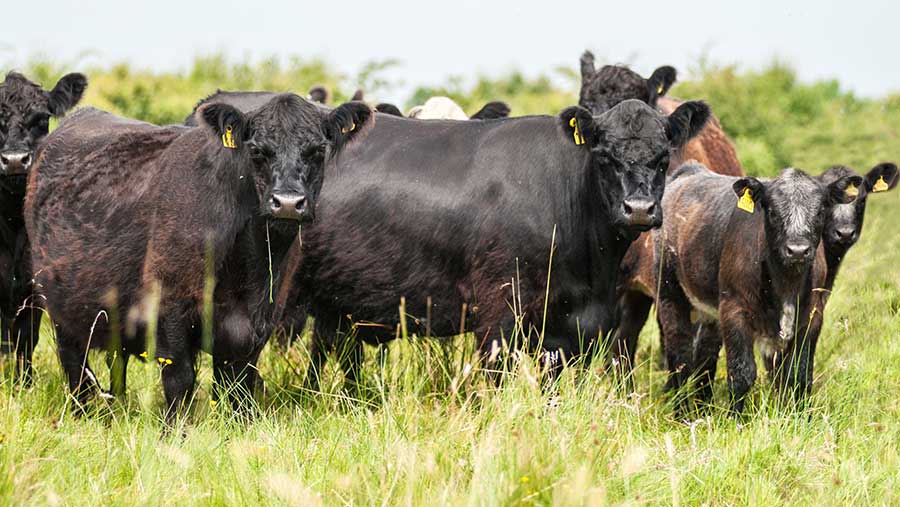 He began running the estate with its huge debts 50 years ago when he was 21, with trustees having run it since the death of his father when he was just 12.

At that time, only 82ha was farmed in hand and the rest was let. But since then, farms have been taken back in house and debts were finally cleared in 1987.

Mr Mounsey-Heysham says the salt marsh has played a crucial role in the farms’ sustainability; allowing them to carry a large number of cattle relatively cheaply.

See also: The young farmer who runs beef cattle in a 36,000ha forest

In the past three years, beef, being the largest enterprise, has seen turnover increase by 52%, with sales at a similar level. However, overheads have only increased by 33%, improving net profit from 3 to 5%. This excludes any subsidies or environmental payments.

This has been done hand-in-hand with environmental stewardship and recently the estate was given the Silver Lapwing Award to recognise the outstanding effort to improve habitat and environmental management on the farm.

Running at up to 11m above sea level, the estate’s 1,249ha of permanent pasture includes the 1,134ha SSSI salt marsh, a nationally important site for wading birds, which is grazed mostly by cattle.

The 80-head spring calving suckler herd, which was re-established in 2010, has been built up with home-bred Beef Shorthorn and Hereford replacements plus 30 bought in registered Galloway cattle.

“The Galloways are used for the HLS conservation grazing on the rougher ground,” says farm manager James Marshall, who has been at the estate for 12 years. 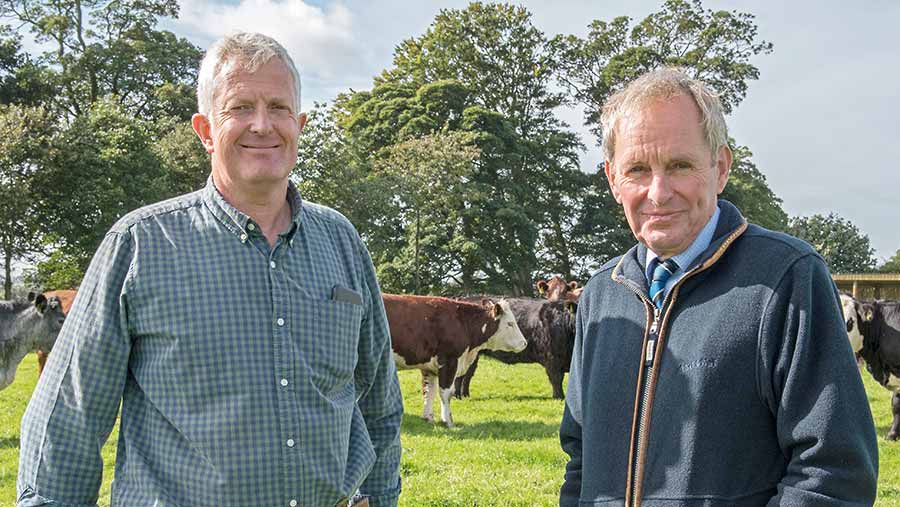 A Beef Shorthorn bull, an Angus and a Hereford run with the herd and some home-bred heifers are sold privately in-calf.

Alongside the suckler herd, they finish 1,300 cattle, mainly native breeds. These are bought in as bullocks and heifers at 12 to 24 months old and home-bred calves, which include 150 pure Galloways.

Finished Galloways are sold to the local retail and catering trade while the remainder are sold deadweight to Woodhead Bros, Scotbeef and others. The Shorthorns earn a premium from the Morrisons supermarket scheme.

They are housed during the winter and fed a good quality silage-based diet with turnout from March onwards as more cattle are purchased. 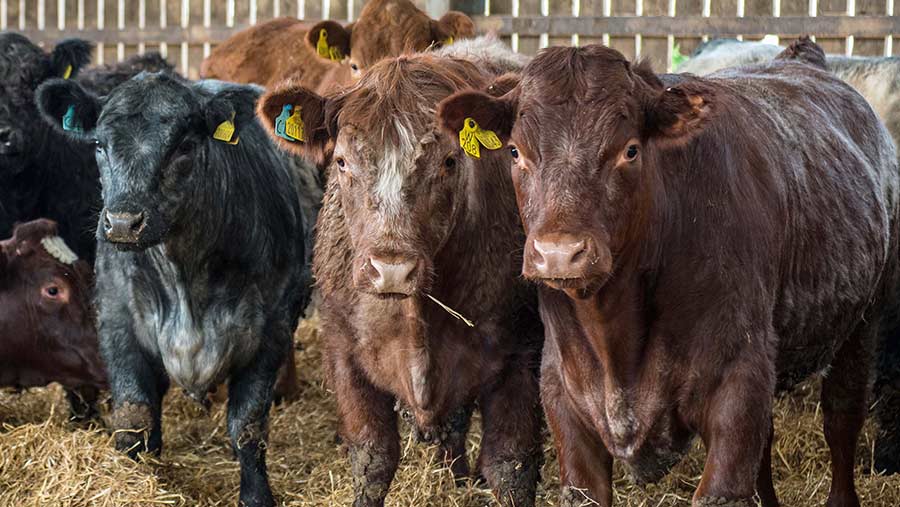 In mid-May, store cattle are released onto the marsh in a controlled operation, because of the vast amount of unfenced land, and grazed there to grow frame until late September to early October, depending on the weather and the tides.

Meanwhile, cows are grazed on the rough, fenced land. The store cattle need to be herded up to three times a day to keep them on the grazing and off the sand.

Natural England requires that at least 800 cattle are on the marsh to manage the grazing and create the right conditions for the wading birds – for example, the cowpats feed insects, which then feed the chicks.

Some of the older, bigger cattle are taken off at the end of July for finishing at 18 to 26 months old on a high starch-based cereal and bean diet. 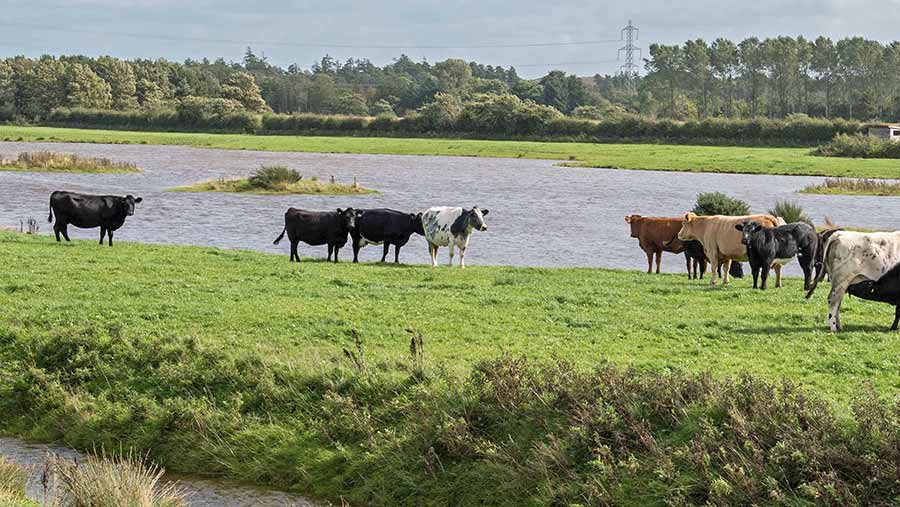 Home-bred cattle and the majority of the rest are finished by two years old, however all are sold under 36 months old. They average O+ or R4L weighing from 270kg to 400kg deadweight to average 330kg.

The estate has worked closely with Natural England for 15 years and, in particular, Dr Bart Donato, its biodiversity adviser and ornithologist, who Mr Mounsey-Heysham describes as a mentor.

James and Brian Hodgson, who help with conservation projects, are responsible for all the estate’s environmental work.

Wet areas created include 11 new ponds, a 22ha lake on the salt marsh and ‘Canute’ – a 12ha intertidal saline lagoon where salt water is trapped behind the sea defences and can slowly filter back into the estuary through a sluice valve.

There are only 1,100ha of similar saline lagoon areas in the UK.

The estate has been collaborating closely with Natural England on the coastal path route section between Allonby and Gretna.

There is also a close relationship with Cumbria Wildlife Trust, which provides a warden for the marsh.

As many as 40,000 geese winter on the Solway – these include barnacle, pinkfoot and greylag varieties. The barnacle geese also come into the fields before they migrate in May.

The marsh is home to a large number of breeding waders including lapwing, redshank and oyster catchers. 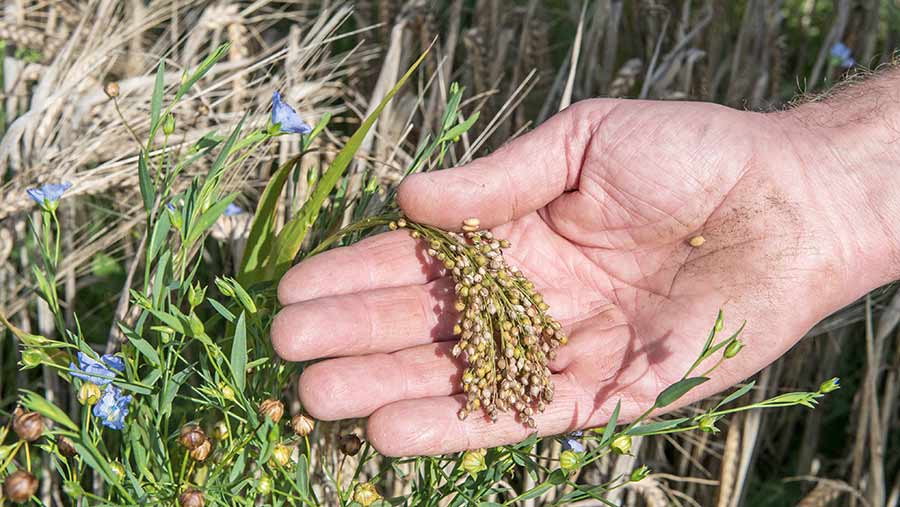 Future of the estate

As part of succession planning, Mr Mounsey-Heysham and his wife Penelope are handing over the running of the estate to eldest son Toby from April next year (2019).

With mixed livestock farms and dairy farms looking to fare best post-Brexit and the emphasis being on public money for public goods, Mr Mounsey-Heysham believes the estate is in a reasonable position.

However, he is concerned the emphasis is on the environment and not food production.

Because Castletown already has such a high level of conservation, Mr Mounsey-Heysham believes this could be a disadvantage as there is not so much room to make improvements if that is what the environmental schemes require.

“My fear is that all the conservation work we have done may be a disadvantage to us,” he says.

“It’s important that Michael Gove doesn’t disadvantage people like us who have been putting heart and soul into conservation and who will be starting on a high base when it comes to a future environmental audit.”