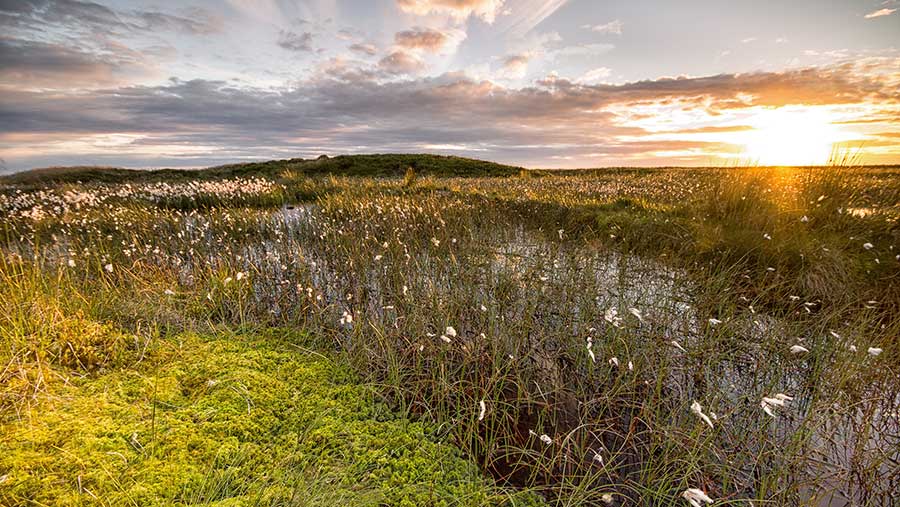 Landowners who embark on a programme of peat restoration can tap into private funding by signing up to a certification scheme that enables them to sell the climate benefit of their work to third-party buyers.

The Peatland Code sets out best practice for projects where the aim is to market the environmental benefits of peatland restoration to companies seeking to mitigate their own carbon emissions or get involved in an an environmental project in their local area.

Restoration has been identified as a key way landowners can help to address climate change because of peatland’s capacity to lock up carbon when in a healthy condition.

Peatland covers 12% of the total UK land area, but at present only about 20% of it is classed as being in good condition.

This is a problem as damaged peatlands are a source of greenhouse gases, releasing the equivalent of 20 megatonnes of carbon dioxide each year, which equates to 4% of UK’s total yearly greenhouse gas emissions.

Developed by the IUCN UK Peatland Programme and certified by Organic Farmers & Growers, the Peatland Code is a voluntary certification standard that quantifies the greenhouse gas reductions that will be achieved by changing land management practices.

The idea is that the standards offer investors third-party verification that the expected climate benefits of the work are credible and deliverable.

The code also ensures the carbon benefit will be regularly measured and monitored over the lifetime of the project – a minimum of 30 years.

Jillian Hoy, Peatland Code co-ordinator at IUCN UK Peatland Programme, said some public money was available for peatland restoration, through schemes such as Countryside Stewardship in England and the Peatland Action programme offered by Scottish Natural Heritage, but it was limited and competitive.

The introduction of the Peatland Code aimed to make peatland restoration more economically attractive by attracting private investment from outside buyers.

The market was still developing and could be quite variable, so it was not possible to give an indication of what the carbon units might be worth, she said.

However, payments were likely to be a lump sum paid at the start of the project to help get it off the ground.

“Every sale will be different and will be down to what the investor is willing to pay,” she said.

“While we are looking at the carbon benefits, these projects tend to have a lot of associated benefits in terms of biodiversity and water quality and sometimes a company may feel it is worth more for the environmental good it is doing.”