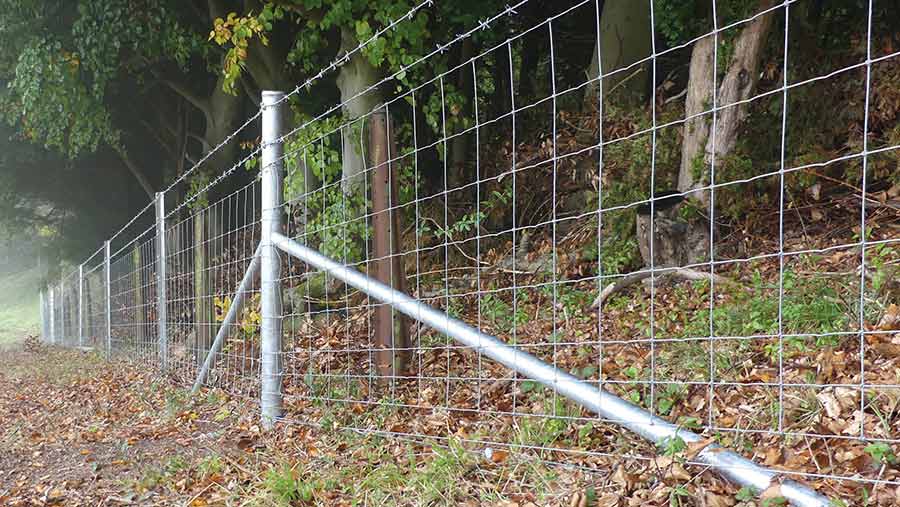 Farmers and landowners will soon be able to claim Countryside Stewardship (CS) money to erect metal fences, not just wooden ones, following a change in the rules for 2022 scheme applications.

Until now, the FG1 and FG2 provisions for fencing and netting (intended to protect habitats and waterways) have stipulated the use of softwood timber for fence posts “that is fully peeled, coated with wood preservative and pressure treated, or treated with an approved preservative” only.

For this, farmers can claim £4/m under FG1 and £4.90/m under FG2, subject to numerous other conditions, such as post diameter and fence height.

But there has been a growing dissatisfaction with treated timber in recent years, both among contractors and farmers.

A survey last year by the Association of Fencing Industries found that more than 90% of the 200-plus contractors taking part had experienced post “failures” since 2012, despite claims from manufacturers that they should last for at least 15 years.

The “wood only” restriction has also frustrated metal fencing suppliers, such as McVeigh Parker, which has been lobbying for more than a year for a change in the rules, to allow products such as its Triple X fencing system to qualify for grant aid.

Account manager Ed Wilkinson has long argued that, while metal fencing is more costly to install in the first instance, its longer life expectancy – of up to 30 years – makes it cheaper in the long run.

Furthermore, using metal posts offers greater flexibility since the fence can be reused more easily, helping farmers engaged in activities such as rotational grazing or agro-forestry.

“Unfortunately, anyone who has been looking to use an alternative product has been prevented from doing so by the requirements in FG1 and FG2 – until now, that is,” said Mr Wilkinson.

But a letter from Defra secretary George Eustice has confirmed that metal fencing may be used in CS schemes from the 2022 application round, for agreements starting in 2023.

The move has been described as a “victory for common sense” by McVeigh Parker.

“With new ‘public money for public goods’ farming policies now in development, it is crucial to demonstrate good value for taxpayer money, and encouraging fences that last does just that,” said Mr Wilkinson.

Got a view on metal versus wooden posts? Write to farmersweekly@markallengroup.com