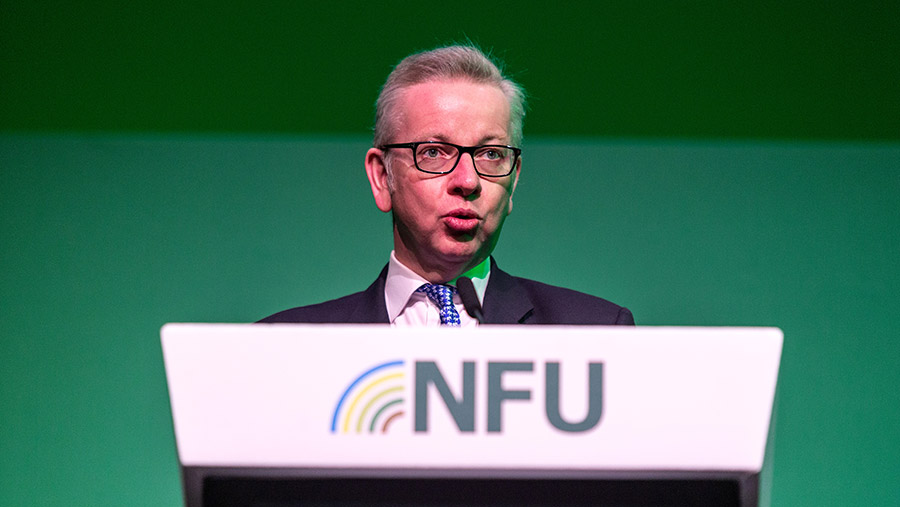 Bridging payments worth up to £28m will be paid from April to farmers still waiting for Countryside Stewardship scheme payments, the Defra secretary has announced.

Michael Gove admitted that the Countryside Stewardship scheme was “still in a mess” and that the government must do better to deliver environmental stewardship payments.

The NFU welcomed the move, but raised serious concerns about Defra’s ability to pay farmers accurately and on time under its new Environment Land Management scheme (ELMs), which will be rolled out after Brexit.

Mr Gove came under fire from NFU president Minette Batters, who said it was totally unacceptable for Defra to have kept 2017 Entry Level and Higher Level scheme agreement holders waiting for payments.

More than 4,000 farmers and their families had “delivered their side of the contract”, but many had been forced to take out loans and overdrafts for income foregone.

Addressing Mr Gove at the NFU conference on Tuesday (19 February), Ms Batters said: “It is indefensible to leave people waiting months, if not years, after they have paid out to deliver their side of the bargain.”

Mr Gove later announced that Defra expects to complete 95% of outstanding 2017 ELS and HLS payments by the end of July.

In addition, he revealed Defra is committed to making payments to 95% of Countryside Stewardship 2018 agreement holders by 31 March. Anyone not paid by this date will receive bridging payments from early April.

Gove: ‘We must do better’

But Mr Gove admitted: “We have to do better in the delivery of countryside and environmental stewardship payments.

“They are still in a mess, the consequence partly of historic IT procurement decisions and the split responsibility for scheme administration between Natural England and the RPA [Rural Payments Agency], which led to inefficiency and confusion.”

Defra transferred responsibility for the handling of environmental stewardship payments from Natural England to the RPA in October.

The number of remaining ES agreements is expected to fall from 18,000 to about 13,000 next year as people move into Countryside Stewardship when their HLS agreements run out.

This is the best performance by the RPA since the scheme began in 2015, but any farmers still waiting at the end of March will be automatically offered a 75% bridging payment in early April.

#NFU19 #BPS2018 97.4% claims processed, compares to 94.1% at the end of December. Good, but still over 2,000 claims awaiting payment,@NFUtweets continues to work for members with BPS payment issues

Commenting on the Defra/RPA payment performance, NFU deputy president Guy Smith said: “The concern is that this government is going to inherit a crisis of confidence in agri-environment schemes just as they want to transfer direct support payments into ELMs.

“The budget for agri-environment schemes will increase exponentially after Brexit. You have to question Defra’s ability to deliver payments for these schemes, given their shaky track record.”