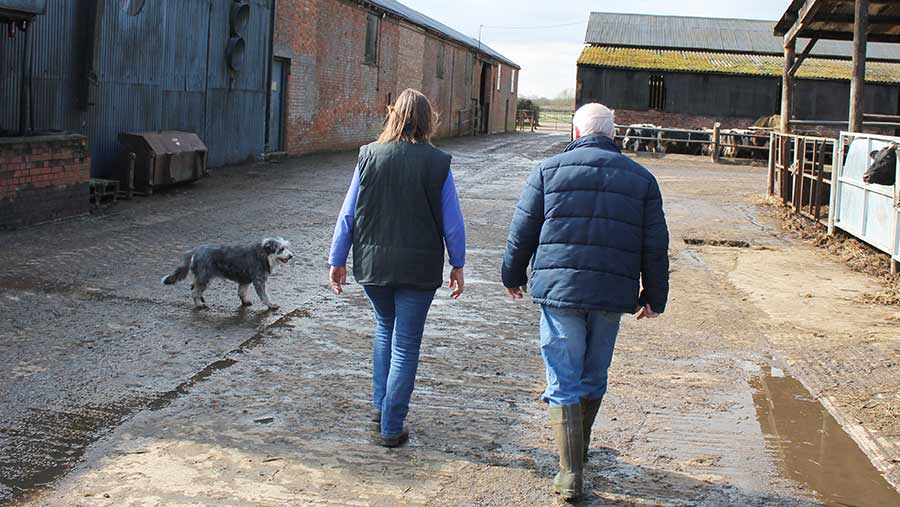 The Royal Agricultural Benevolent Institution (Rabi) and the Farming Community Network (FCN) have seen an increase in calls from farmers and farming families in need, including cases of depression, diseased animals, missing BPS money and much more.

The charities work in slightly different ways, but are both proponents of farmers helping farmers, and encouraging people to reach out for the help they need.

In December, a letter from the Rural Payments Agency told thousands of farmers they would not be receiving their BPS money, and would not see a bridging payment in April.

In the meantime, the agency told farmers to contact farming charities for support.

Farmers Weekly went to visit Rabi and FCN to find out what they do, how they can help farmers, and how they can be helped in return.

The Royal Agricultural Benevolent Institution (Rabi) has historically been known for helping the elderly, sick and disabled, but year-on-year more working farmers have been contacting them for support, with a 47% increase in these calls in 2018.

The charity, which has been helping farming families since 1860 and also owns two care homes, runs a confidential helpline from its head office in Oxford, where around 25 executive, communications, admin and welfare staff work.

When a current or retired farmer or family member calls the helpline, a member of the welfare team, who crucially understands farming and its issues, is available to speak.

Next, a regional officer will meet the caller in person to assess the problems and how Rabi can assist.

Finally, the application comes to the welfare committee, made up of trustees, for the help to be approved.

How RABI can help

Rabi aids farmers, farmworkers, dependents, families, widows/widowers, and retired or former farmers, who are in genuine need, across England and Wales.

The help is tailored to the individual, depending on their situation and need.

Though Rabi is primarily designed for helping farming families rather than their businesses, there is an element of flexibility.

For example, training grants can be awarded to assist people staying in farming by taking on a second job, or paying relief farmers to help out if there has been illness or an accident.

“People don’t call us with one problem, it’s multiple things.

“We’re now helping farmers with benefits advice, such as filling in forms, making applications, chasing up authorities, going to assessments, and helping with appeals.

“This is a time-consuming process, but it is money they are entitled to.

“We’re starting to plug the gap of other organisations that used to do that.”

Rabi can also signpost callers to other charities, such as the Farming Community Network or the Samaritans, if necessary.

Rabi encourages anyone who is struggling to contact the charity, preferably as soon as possible, to see if help can be provided. 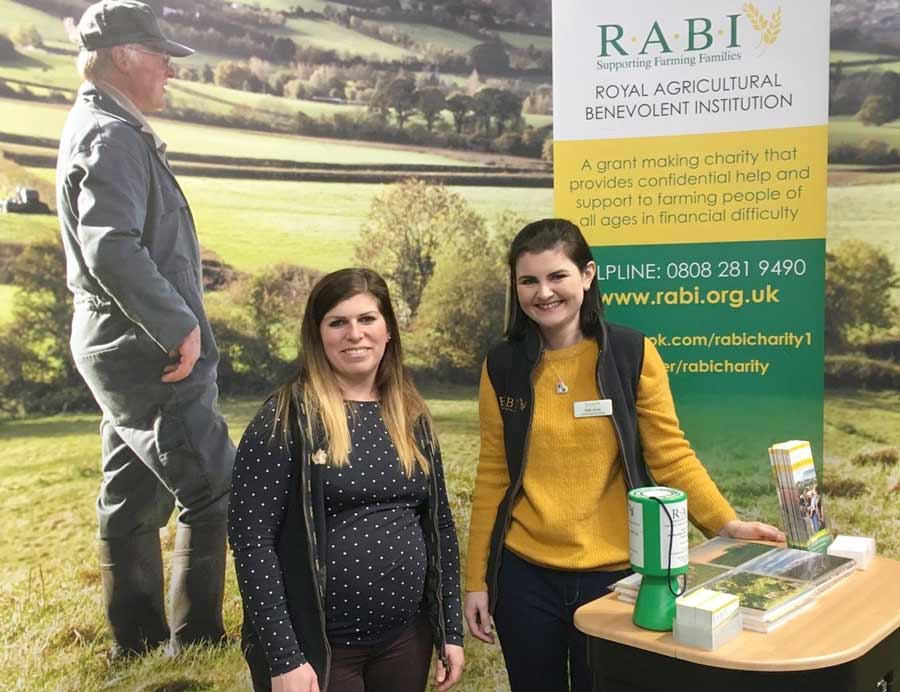 “There’s no shame in contacting us, we are a farming charity and we are here to help,” said Mr Harris.

“In farming, we are used to adversities so we think the way to deal with that is to get your head down, work harder and soldier on.

“You can plan well and make good decisions and run things as well as possible, but some external force, such as the weather, can scupper your plans quite quickly.”

Many of Rabi’s fundraisers end up asking the charity for help at some point, and often people who are supported go on to give back the money and more by organising their own fundraising events, he added.

How you can help

Part of Rabi’s funding comes from investments, legacies and charitable trusts, but a huge amount is raised by regional committees – headed up by a manager – who organise fundraising events.

To get involved with a group, contact the regional manager in your area or the head office for more information.

“It’s a fun, sociable thing to do and puts you in touch with like-minded people in farming,” said Mr Harris.

“We’re always grateful for any support people can give to us.

“We are all about farmers helping farmers, and letting people know we are here for them is the most important thing.”

Donations can also be made online at www.rabi.org.uk

Peter Holliday, a 53-year-old self-employed agricultural contractor from Silloth in Cumbria, was diagnosed with throat cancer in 2015.

His first thoughts were about how he and wife Ali would be able to pay the bills while he was undergoing surgery and radiotherapy.

Rabi and Macmillan Cancer Support helped him throughout his treatment, with Rabi clearing some domestic bills and covering the costs of hospital travel.

Peter said: “You’ve no idea how much it meant to me to see a cheque arrive through the door, it was such a weight off my mind. All I could see was a heap of bills on the table.”

The Farming Community Network (FCN) was founded in 1995 by a group led by Christopher Jones MBE and changed its name from the Farm Crisis Network in 2013 to emphasise its focus on year-round support and working together to solve problems.

The volunteers answer the helpline, take on cases referred to their area, and assist with fundraising and publicity.

The calls range from people who just want to have a chat, to those who want a visit and assessment.

Charles Smith, FCN’s chief executive, said: “It takes a great deal of courage for people to call us. We make sure they know they have come to the right place, reassure them that we’re listening and we will try to help.”

If the caller is happy to be contacted by a volunteer in their local area, an on- or off-farm visit is arranged. During this visit, all the current issues are evaluated and a support package is created for the farmer and/or their family.

How FCN can assist

“We rarely get people calling with one problem, there’s usually a myriad of problems,” Mr Smith said.

“If a farmer calls with concerns about depression, we often find there are other things to deal with, so we deal with the whole package: business issues, personal issues and issues in the home.”

FCN does not give out grants or advise callers, but is able to give support, talk though problems, help prepare for business meetings, and signpost to other services that can help.

The charity also arranges meetings between farmers and police officers, to discuss rural crime issues, and encourages emergency services to pass on the organisation’s details to anyone struggling, for example, after a farm fire.

“The most valuable thing is that our volunteers spend time with callers who may not have anyone else to talk to,” Mr Smith added. “We are here for them for as long as they want.”

The amount of calls FCN receives is increasing year-on-year. Summer 2018 was the busiest summer on record, but still less busy than a normal winter.

The average age of callers is decreasing and more sectors are calling in, such as pig and poultry farmers. Most often, callers are livestock, upland, tenant farmers.

“Farming is difficult even in a good year, so your wellbeing needs to be resilient in order to thrive in it,” said Mr Smith. 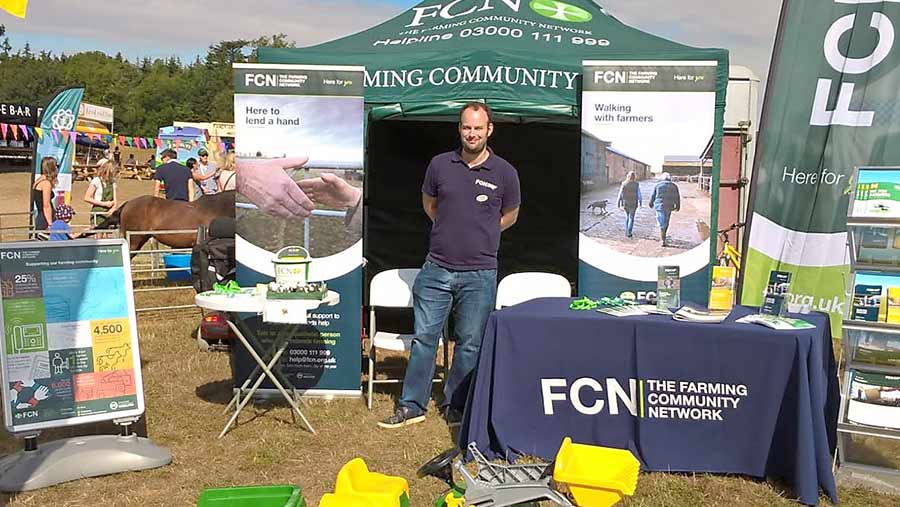 “Farms are often passed down over generations and it can be difficult to admit it’s not going as well as it did before. They don’t want to be the generation that loses the farm.

“The problem is when you have struggled for a long period of time and you don’t have the resilience to recover.”

Mental health can fluctuate in the same way as physical health, Mr Smith added, and it is important that farmers start talking about their problems and improve the way they look after themselves.

He also recommends that anyone who has concerns about a friend, family member or colleague should broach the subject.

“By raising the issue, you are giving them permission to speak,” he explained. “You cannot make things worse by asking questions, it shows you care.”

FCN volunteers become case workers, fundraisers and ambassadors, talking about what the network does and raising awareness. To get involved, contact the national office or your local group.

The organisation is also seeking corporate and professional contacts who are able to support FCN.

Peter, a farmer from Yorkshire, said: “It is so good to have someone to talk to who understands and who I don’t owe money to and who doesn’t make me feel like it’s all my fault.”