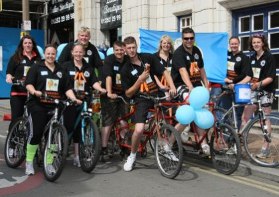 Young Farmers have been rolling into Blackpool all Friday (May 6) for the AGM weekend, with many taking the opportunity to cycle to the seaside town to raise cash for good causes.

Students from Harper Adams completed a 100-plus mile ride from the University College in Shropshire, raising money for the Anthony Nolan, Macmillan, Leukaemia and Lymphoma Research, and Teenage Cancer Trust charities.

The cyclists – Gareth Parker, Charlie Morris, Jocelyn Orr, James Wadland, Ruth Smith and Ed Daniell – said the journey went without mishap “other than getting covered by a muckspreader at one point”.

James Bust, Jack Tooley and Chris Frost from Lowdham Young Farmers cycled 125 miles. Their trip from Halam in Nottinghamshire, in aid of MNDA (Motor Neurone Disease Association), saw them cross the Pennines with an overnight stop in Warrington, before continuing through Wigan and Preston to Blackpool.

Yorkshire Air Ambulance will be the beneficiary of an epic cycle trek by members of Howden YFC.

The team from the East Riding of Yorkshire started on the Trans-Pennine trail, which runs from Hornsea to Southport, and then onwards to Blackpool over two days.

They notched up 148 miles from Scarborough to the golden mile, promoting YFC and raising funds for the Teenage Cancer Trust.

They chose the carrot theme as it was visually striking and to promote the county’s carrot-growing heritage.

Rachael Moore from Worth Valley YFC was part of the team.

“It was brilliant, I loved every minute of it,” she said after arriving in Blackpool. “It was very hard work and we arrived with numb bums, but we achieved it with some young farmer will power and determination. It was definitely worth it, knowing we might make the lives of people our age that suffer from cancer a little easier,” added Rachael.

Lancashire members cycled from Bridlington to Blackpool, covering 150 miles in two days, raising cash for the county federation in the process.

The prize for the longest cycle journey went to 22-year-old George Steer from Tavistock, who covered a massive 450 miles over five days, camping in field on the way. “I felt like a challenge and this was certainly a bit of a mission,” he said.

Cornwall YFC members put their walking skills to good use, departing last Saturday (April 30) so they could factor in some serious climbing into the journey.

Follow the full YFC agm on our dedicated young farmers page – it includes news, pictures and will include video.