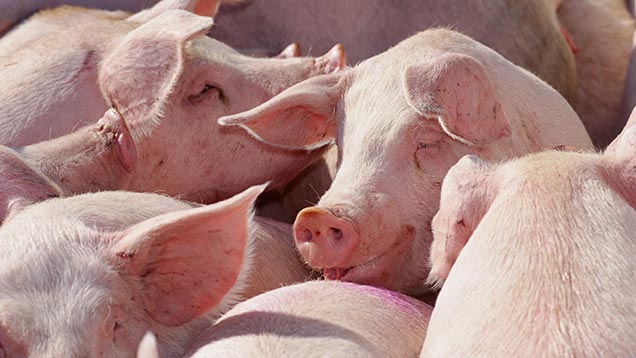 Finishers are losing about £8 a pig, with prices having fallen for five weeks in a row to their lowest since June 2008.

The EU-spec Standard Pig Price dropped to 129.22p/kg in the week ended 3 October and another fall is expected when prices for the following week are released later today.

Cost of production (Cop) figures for July to September will be released in mid-November. But using those for the second quarter of this year – when pigmeat cost 139p/kg to produce and the average carcass weight was 81.72kg for the week ending 3 October – the gap is just over £8/head.

With feed prices having reduced slightly since the second quarter, the Cop could be slightly lower for July to September, said Stephen Howarth, market specialist manager with AHDB Pork Market Intelligence.

“It’s one of those periods when most of the news is negative, although strong demand from China helps,” said Mr Howarth.

What is behind the price pressure

Strong production and a challenging consumer and retail environment lie behind the price pressure.

Growth in EU pig slaughterings is expected to continue until at least the middle of 2016, albeit at a slower rate than in the first half of 2015, according to the EU Commission’s forecast working group for pig, which met on Monday.

Pig slaughterings are forecast to rise by around 2% year on year in the second half of 2015, with growth slowing to around 1% in the first half of 2016.

Many of the main producing EU member states forecast pig numbers will be little changed from last year’s levels.

Despite the strength of the pound, imports had not seen a big increase over the year as a whole, said Mr Howarth.

However UK imports and exports of pigmeat both increased in August. Imports, at just over 30,000t, were 8% higher than the same month last year and the highest for August since 2008.

This is the third consecutive month to see rising imports, although it follows two months when they were much lower.

If the trend continues, it could put further pressure on UK pig prices, especially as imports were cheaper, with the value of pork imports 10% down on a year earlier, at £49.2m.

Offal exports were also much higher, with strong growth to both EU and non-EU markets. In particular, sales to China nearly doubled, only partly offset by lower shipments to Hong Kong.

The new Trans-Pacific Partnership (TPP) trade deal, signed on Monday, could have an impact on the global pork trade, said AHDB Pork.

On 5 October 12 countries around the Pacific Rim signed a deal covering 40% of the world’s economy, with the USA, Canada, Mexico, Japan, Australia and New Zealand among the countries involved.

It is expected to reduce or eliminate many tariffs on agricultural products, including meat, over the next 10 years. Governments will ratify the deal in the coming months.

The main pork importers among TPP signatories are Japan, Australia and Mexico, while the US, Canada and Chile are overall exporters.

Last year, the US and Canada supplied around half of Japanese pork imports, down from more than 60% in 2012 as shipments from the EU rose.

AHDB Pork warned that the TPP may make it harder for EU exporters to compete in this important market and could see its market share fall again.