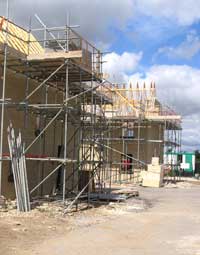 The Community Right to Build scheme, which would require 90% community support before development could go ahead in a village, could create long-lasting conflict within communities.

The Rural Coalition – made up of organisations including the Country Land and Business Association, the Local Government Association and the Campaign to Protect Rural England – said the scheme could also halt local development.

Instead it said elected parish councils should be given the powers to initiate community-led developments, while planning systems should be “reinvigorated and localised” to allow rural areas to solve rural housing issues.

The Right to Build scheme was unveiled last month as part of Prime Minister David Cameron’s “Big Society” plans to give locals the chance to have a say in how their areas are developed.

While the coalition called for more planning decisions at a local level, it said communities should not be left to agree on developments.

Local authorities should instead be given the freedom to address the “urgent need” for housing for young families and low-income households in rural areas.

The warning came as the Rural Coalition published a report outlining plans to give local people, community groups and councils the opportunity to secure the future of the countryside.

Matthew Taylor, Rural Coalition chairman, said: “On its current course, with no change in policy and no commitment to action, much of the countryside is becoming part dormitory, part theme park and part retirement home.

“We need a fundamental change of approach at both national and local levels to give rural communities a more sustainable future. The rural coalition believes the government’s commitment to localism and the Big Society opens the door to those reforms.

“For 50 years or more, policy has undervalued the countryside and failed to meet the needs of rural communities. The result is starkly apparent: rural communities have become increasingly less sustainable and less self-sufficient.

“Today we publish a blueprint for the Big Society in small places – if the government is serious about localism, it should rise to the challenge.”