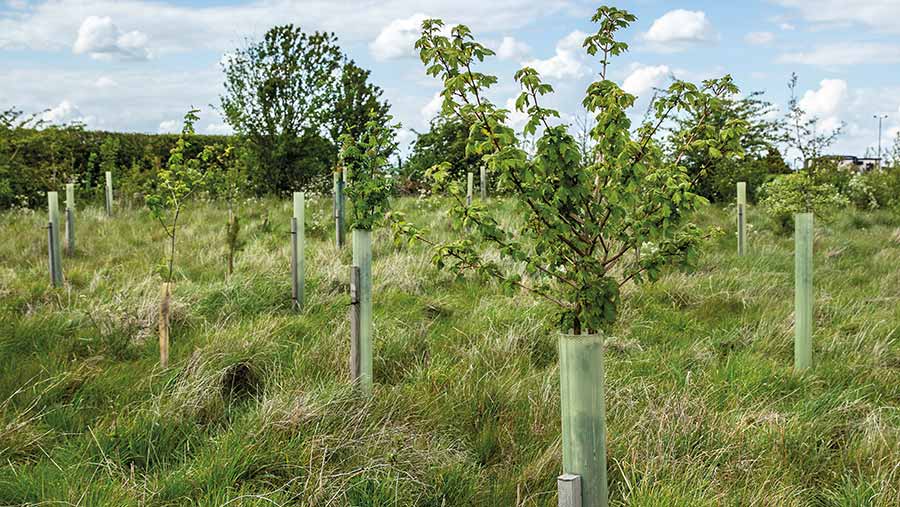 Historically, much stock has been imported, but with increasing issues relating to pests and diseases, as well as logistical challenges, there is a good market for British-grown trees, says Ashley Lilley, director in the food and farming team at Savills Rural.

An international model of plant trade has developed over the past 30 years which has made importing trees more cost effective than growing them in the UK: between 1992 and 2019 the value of tree imports increased from £6m to £93m.

See also: How to plant the right tree in the right place on your farm

However, this increased reliance on imported trees has led to at least 20 serious tree pests and diseases being inadvertently imported into the UK, resulting in the loss of tens of millions of trees, says the Woodland Trust’s principal forestry policy advocate, Nick Phillips.

A significant volume of imports are planted for landscaping, gardens, conservation for timber and forestry to meet requirements, but there is increasing demand for home-produced seedlings and saplings, with the Woodland Trust encouraging UK sourcing.

Large-scale tree planting is gaining traction, due in part to the role trees play in offsetting carbon emissions, b

The main types of trees planted at scale in the UK fall into three categories – native broadleaf, conifers and ornamental, grown in tree and forest nurseries.

Most new trees planted in Scotland are conifers. England and Northern Ireland plant more broadleaves while in Wales the split is about even.

However, foresters are reporting issues with buying seedlings and saplings and The British Association of Landscape Industries says stock of a wide range of planting material in the UK has become limited.

See also: Guide to funding for tree projects on farm

Native trees are most affected and, where they are available, prices have increased significantly in just a few months.

While Covid-19 and Brexit are contributory factors, a widespread increase in demand for planting material is the main reason.

What will be in demand?

Demand is expected to grow across all species, but for native trees in particular: oak, birch and rowan sales are already strong.

There is also likely to be more requirement for non-native conifers to meet the UK’s timber needs.

How long do these species take to produce?

Anything from 18-36 months, depending on how they are grown from seed collection to saplings, so there will be a lag in cashflow before income is generated.

There are three production methods:

What land type is best?

The previous use of land may influence its value as a potential nursery site. Most trees do best at a soil pH of 6-7 but it depends on the species – as a guide 5-6.5 is right for an oak, and 6-7 for a fir.

The amount of weed seed present is a factor too, so advice should be taken on this aspect.

Mr Lilley says light, well-drained soils without too many rocks are preferable for good establishment.

Ease of operations should be considered too as many of these occur during the wetter months.

A flat site, sheltered from strong winds, is preferable.

Sites facing south can have problems with overheating, while north-facing hollows can be frosty. Seedlings are easily damaged if they become too dry or freeze.

Some trees grow well with nothing but rainfall, others need controlled and constant watering, so careful planning of irrigation to seedlings is critical.

Ideally, the site should be close to a road so that materials can easily be delivered, and trees moved off.

Producing large numbers of good-quality growing stock requires skill. Some established nurseries offer growing contracts, which may be a less risky way into the sector.

Several colleges offer training and qualifications, alongside bodies such as Lantra; distance learning is also available.

Are any licences and permissions needed?

This sector is regulated through the Animal and Plant Health Agency.

An application for change of land use under Town and Country Planning Regulations is not needed as a tree nursery is considered to be a broad part of agricultural land use and therefore a form of permitted development.

If in doubt, check with your local planning authority.

Depending on scale and the location, Environmental Impact Assessment Forestry Regulations may need to be considered, because if a tree nursery bed becomes unmanaged, it will likely form woodland.

Anyone growing species governed by the Forest Reproductive Materials (FRM) regulations will need to register with the Forestry Commission and comply with FRM regulations when selling plant stock.

Oak and Scots pine are among the species covered by the regulations which cover seeds, cones and parts of a tree obtained by propagation.

Micro-scale nurseries producing bare-rooted growing stock can be run with lower costs, but for growing seed in cells, budget for the cost of polytunnels, watering systems, root-trainers and the growing medium.

Making a profit from the business depends on scale but is likely to take a few years of selling saplings to get to this point, say advisers.

Trees grown in nurseries are considered permanent crops so are eligible for the Basic Payment Scheme.

If starting a sapling business isn’t a good fit as a farm enterprise, opportunities exist to supply seed from established farm woodland.

Richard Hunter, technical support and industry development support manager at Confor, a membership organisation promoting sustainable forestry and wood-using businesses, says this is an opportunity to generate income from an existing source.

“Consider what resources you already have – do you have a woodland in which you could source your own seed to grow or to sell to Forestart, the main forest tree seed supplier,’’ he says.

There is a requirement to register with the FRM scheme. 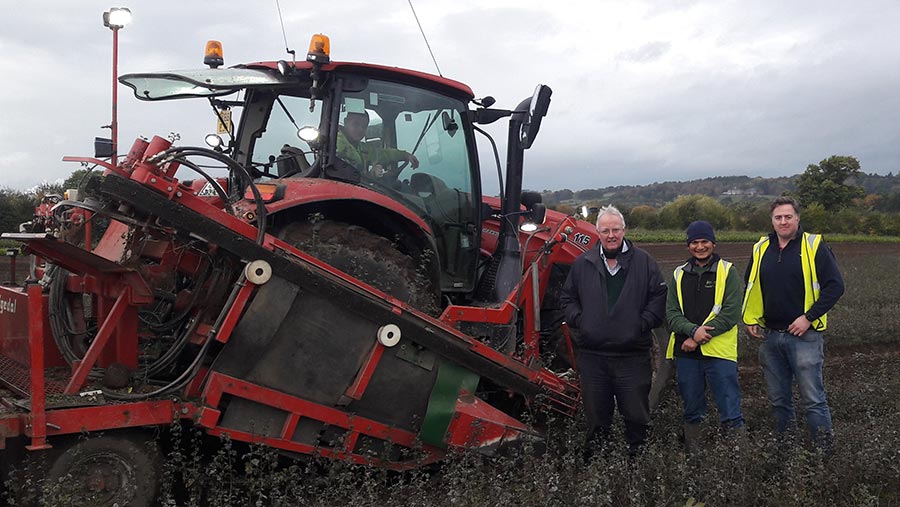 Until the end of the 1990s he was primarily a cereal producer, but saw the potential for better returns by diversifying into growing trees at Dilston Haugh Farm, Corbridge.

“All my cereals were going into intervention so the government was determining the price I would be paid, I was looking for something in which I could set my own price,’’ Mr Beaumont explains.

He grows saplings from seed to 60cm, a process that can take between one and two years, depending on the species.

Seed is either home collected or sourced from Forestart, the UK’s principal supplier of tree and hedging plant seed.

Until five years ago, he mostly concentrated on growing conifers because that was where the demand was, from Scottish planting schemes, but he is now growing more broad-leaf varieties – all native species including oak, beech, cherry and hawthorn and woody shrubs suitable for woodland planting.

Mr Beaumont’s saplings presently command a price of around 30p – up from 25p a year ago, a sharp price rise fuelled by very high demand.

Such is the demand for bare-root trees that he has already sold his entire supply for this season.

He says his TreesPlease business is profitable “when things are going well’’, but warns that it is a sector fraught with risk.

During the 30 years he has been growing saplings, he has based a significant level of production around government planting schemes, but on three occasions he has been forced to destroy some of the crop because grant funding was not forthcoming or applications had failed to materialise.

“Governments have been very big over the years on promising all sorts of wonderful results from tree planting, but often rather short on delivery. Growers have had their fingers burnt and hundreds of thousands of trees have had to be destroyed, nurseries who have been in this business for years are now naturally more cautious.’’

Farmland type will largely determine if a tree growing enterprise will be successful, Mr Beaumont advises.

“The land needs to be reasonably flat and light because you are on it all winter, and if it is not very free draining you can make a heck of a mess.’’

“We have a lot of money tied up in machinery, you need a lot of small machines for this job and it seems that the smaller the machine the more expensive it is,’’ says Mr Beaumont.

It is also labour intensive and availability of workers has become a major issue this year: trees are a non-food crop and, therefore, don’t fall within the UK government’s Seasonal Agricultural Workers Scheme for European workers.

From October to March, the harvesting season, Mr Beaumont employs up to 50 people, and he has a year-round workforce of 19.

One of the biggest jobs is to grade the saplings into bundles of 25 according to size.

“We are utterly reliant on getting labour at certain times of the year, and that is getting more difficult,’’ says Mr Beaumont.

“You have got to be a very large business, larger than us, before you can seriously automate the process.’’

But he is optimistic about the future.

“There are lots of exciting things happening around tree planting, including the Queen’s Green Canopy initiative for the Queen’s Platinum Jubilee year, there is an enormous amount of potential for planting now and going forward.’’

In this live webinar our panel of experts will answer your questions and give advice on common areas of problems, with both farming and non-farming enterprises in mind. Typical issues they will focus on include: disputes; decision making; and misunderstandings in the areas of legal, management and insurance.
Register now