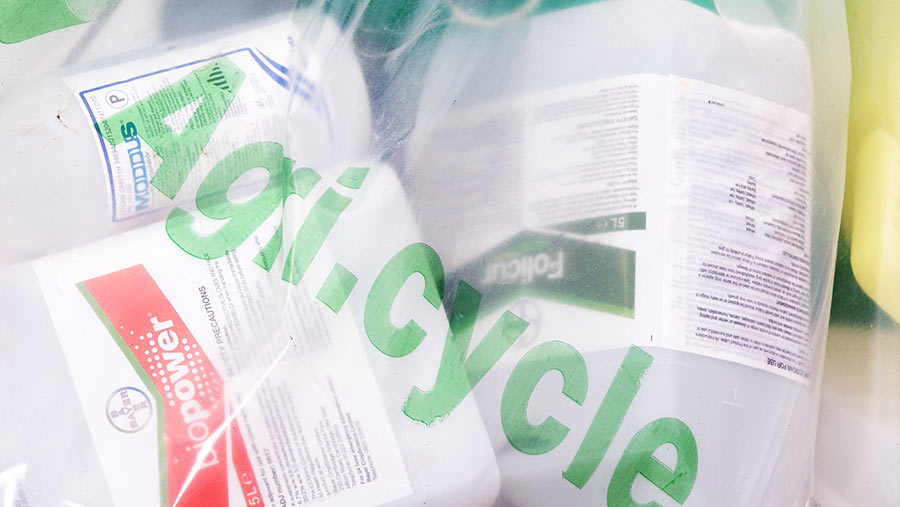 The image of waste plastic bobbing around on the ocean during an episode of the last series of David Attenborough’s Blue Planet series put a new spotlight on to the world’s plastics problem.

Since then there has been a huge increase in public and political attention given to the level of plastic we consume and where it ends up.

When the government published its 25-year environment plan in January it pledged to reduce single-use plastics and increase plastics recycling.

So how big an issue is waste plastic in the world of agriculture? What laws do farmers need to comply with on this issue? What prospects are there for reducing the amount of plastics we consume?

See also:A guide to farm recycling: the options and costs

How much waste plastic does agriculture produce annually?

Agriculture is certainly not the main source of waste plastic in the UK, but it produces sufficient amounts to make the authorities view it as a sector that needs to be monitored and controlled.

The bulk of plastic packaging arising in the UK comes from the grocery sector – in 2014 the figure was about one million tonnes of waste plastic, according to the Waste and Resources Action Programme (also known as WRAP).

By contrast, the same data suggests agriculture accounted for about 13,000 tonnes of waste plastic – the bulk of this being film-based in the form of silage wrap and sheeting.

However, despite not being the biggest source of waste plastic, the Environment Agency (EA) still regards farm plastic as a big waste stream and says farmers need to manage it carefully in order to prevent it escaping into the environment.

While the amount of waste plastic produced by each individual farm is relatively small, it adds up. 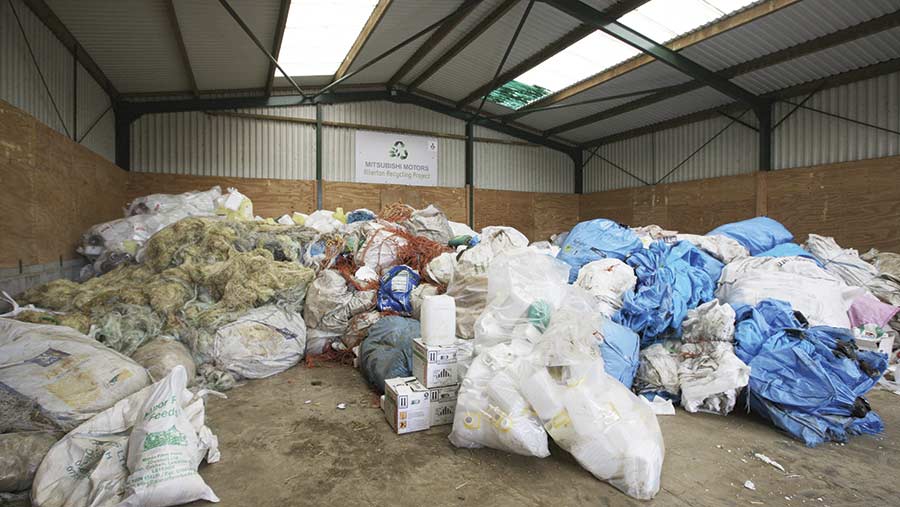 So what are farmers’ responsibilities when it comes to handling plastics waste?

The Waste Management (England and Wales) Regulations 2006 (2005 in Scotland) extended waste management controls to agriculture, having previously only applied to other industries.

One of the big changes was it ended the practice of burning or burying farm plastic, including baler twine, silage film, spray cans, fertiliser and seed bags.

Waste plastic can only be stored on a farm for less than 12 months.

Farmers are also required to use an authorised and reputable waste management business to arrange collection and recycling of plastic, and other waste.

Environmental regulators may ask to see evidence that farm waste, including plastic, has been handled correctly, so accurate and sufficiently detailed records must be kept.

Farmers will be expected to be able to show that they have fulfilled their duty of care requirements by producing a waste transfer note, which includes a written description of the waste that has been moved and is signed by both parties involved in the transaction. Waste transfer notes should be kept for at least two years.

While most farmers do comply with the law, it is acknowledged that within the farming industry there are still some that persist in illegally burning plastics.

Stick to the waste regulation rules

Why is burning farm plastic a problem?

Burning plastics releases harmful pollutants into the air, which can seriously affect local air quality. As a result, burning or incinerating waste is only allowed with the right sort of permit or licence.

It must be done in a very controlled way that reduces pollution and has sophisticated equipment to capture and control pollutants.

What are the penalties for breaking the rules?

The maximum penalty for those convicted of breaking the regulations is £50,000 and/or 12 months imprisonment. The EA says it takes all breaches seriously and regularly prosecutes waste criminals.

In practice, industry experts suggest enforcement activities are limited and compliance with the regulations comes mainly from the need for farmers to show copies of their waste transfer notes to farm assurance inspectors as proof that they are dealing with waste appropriately. 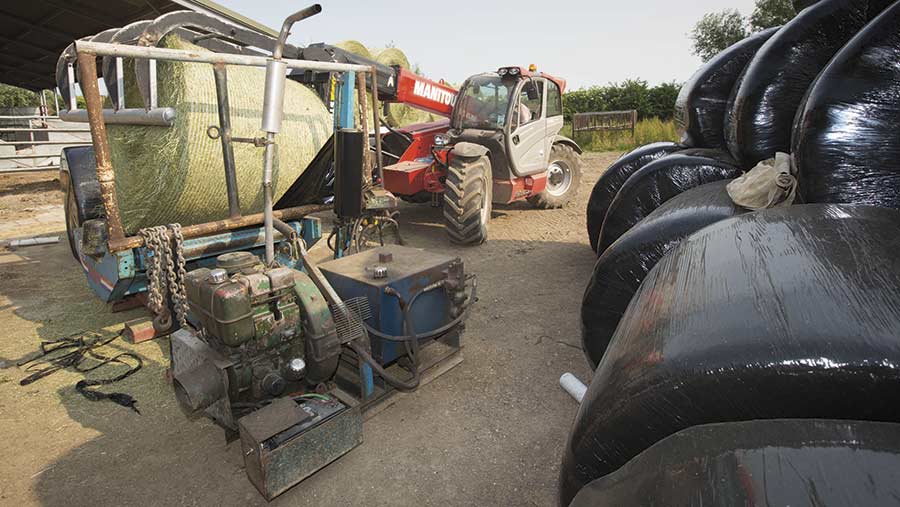 What’s the easiest way of meeting the rules?

Many farmers choose to work with a waste collection and recycling service, typically paying either a collection charge for each load or an annual membership fee or charge based on acreage.

Many of these services provide the farmer with waste plastic bags which they can then either deliver in to a collection point or have collected direct from farm.

Farmers who regularly deliver their own waste to an approved collection place should be registered with the EA as a lower-tier waste carrier. This registration is free.

Farmers should also be registered with the EA for an agricultural waste exemption to be able to store plastic waste before its disposal. This is free, but farms need to be re-registered every three years.

How should different types of waste plastic be dealt with?

Plastic waste needs to be collected and stored securely on the farm, with different types of plastic separated. For example, dirty plastic film from silage bales needs to be kept separately from plastic pesticide containers because the process of recycling the waste differs according to the type of plastic.

What happens to plastic once it has been delivered to a collection site?

Mark Webb, director of Farm XS, which recycles both farm plastics and cardboard, says in his experience it is possible to recycle 99% of the plastic collected from farms, with waste plastic being remade into a wide range of products, including car body parts, bin liners, builders’ membrane, road cones, garden furniture, plastic sheeting and coat hangers.

Waste plastic is also recycled into more of the same product; for example, sprays cans are often turned back into spray cans and silage wrap remade into new recycled silage wrap.

Mr Webb says that waste plastics are baled into half-tonne bales before being sold to a variety of recycling markets. The recycling process involves turning the waste into lightweight pellets, which can then be remade into recycled products.

The one product it is not possible to currently recycle regularly is netwrap, says Mr Webb.

What other problem areas are there in dealing with waste plastic?

The EA warns farmers to be vigilant of waste criminals – either those that offer ”too good to be true” disposal costs, or who ask for a “temporary store” on farmland.

Anyone who sees or suspects illegal waste activities is urged to report it anonymously to Crimestoppers or call 0800 555 111 or to report it through the EA Incident hotline on 0800 80 70 60.

Plastics innovation – where are we going?

Plastics made partially or wholly from plants are being touted as one of the solutions to the world’s waste plastic problem.

Not only is their manufacture less environmentally damaging, as it does not require the same levels of fossil fuels, but if they are also biodegradable it alleviates many of the problems associated with their disposal. However, not all bio-based plastics are biodegradable.

According to Mr Higson, the most common application of bio-based, biodegradable plastic within the farming sector itself is agricultural mulch films, which are used to protect a wide range of salad and vegetable crops.

While biodegradeable mulch films have been on the market for a number of years, they received a boost towards the end of 2017 when the European Parliament voted in favour of regulations that will promote their use.

Their appeal is that they can be ploughed back into the ground after use and will degrade through contact with the soil.

Meanwhile, work is ongoing to develop a more environmentally friendly version of bale wrap. Farmers Weekly reported in 2016 that three PhD students from Imperial University were working to develop an edible bale wrap, made from a biopolymer, suitable for hay, straw and silage.

In the same year, a group of school students from Canada entered a prototype version of an edible bale wrap made of sugar and starches into the International Global Innovation Award.