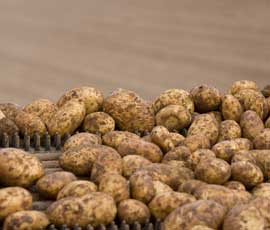 A director from Cambridgeshire potato supplier Greenvale has been found guilty of paying bribes to a buyer at supermarket Sainsbury’s.

The trial at Croydon Crown Court was told that Andrew Behagg, 60, authorised payments to the buyer in return for contracts worth millions of pounds.

Mr Behagg was convicted of one charge of corruption. Two other men involved in the crime, Sainsbury’s buyer John Maylam, 44, and Greenvale’s account manager David Baxter, 50, admitted corruption at a hearing earlier this month.

Commenting on Mr Behagg’s case Judge Nicholas Ainley said: “For any case of this magnitude a sentence of imprisonment is almost inevitably passed, and a significant one at that.”

Mr Behagg is expected to be sentenced on 22 June at the court in Croydon. Mr Maylam, 44, of Bearstead in Maidstone, Kent, and Mr Baxter, 50, of Hinstock, Market Drayton, Shropshire, will be sentenced on the same day.

During the trials the court was told that Greenvale had a two-year contract to supply 45% of  Sainsbury’s potatoes, worth £40m. But the supermarket was overcharged by £3.8m in the alleged corruption.

The extra money went into an account, then some of it was paid to Mr Maylam.

The money was delivered in plain envelopes, totalling hundreds of thousands of pounds.

The crime was uncovered when a Greenvale employee was asked to withdraw £5,000 bundles of £50 notes from a small local bank.

Greenvale financial accountant Simon Forster grew suspicious and found payments were being entered into their financial system as “entertaining” expenses and then written off as “raw materials” or storage costs for potatoes at fictitious firms in Spain and the UK.

Mr Forster was told by Mr Behagg that the payments were “rebates” and part of a “scheme”.

After the verdict, Produce Investments, the owners of Greenvale, said:

“Our investigations showed that £3.2 million – rather than the figure mentioned in court –  had been disbursed improperly and all such arrangements were stopped immediately.

“We instigated this investigation and have since then introduced new procedures to make sure that such abuse can never happen again.

“We acquired the company in early 2006. In December 2007 it became clear to us that there might be financial discrepancies involving the company’s commercial relationship with Sainsbury’s. After a thorough investigation carried out on our behalf by accountants and legal advisers, we reported what was found to Sainsbury’s in March 2008 with a view to jointly alerting the police.

“Our relationship with Sainsbury’s is now on a footing as before and we continue to be one of the largest supplier of potatoes to shoppers all over the country.

“A new management structure has been in place since we discovered the improper payments.”