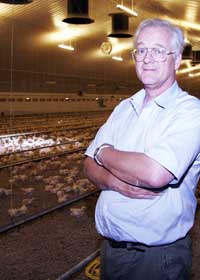 Consumers could face a shortage of British chicken unless producers receive 1-2p/kg extra for their birds, so allowing them to reinvest in their rearing facilities.

That was the warning by producers on BBC Farming Today, which this week is focusing on poultry farming.

NFU Poultry Board chairman warned on today’s (5 May) programme that if producers didn’t receive more for the chickens they raised, there was a risk of some exiting the sector.

“Currently, we can import from overseas to plug the shortfall. But is this going to be possible in 10-15 years time with the predicted increase in global population set to fuel overseas demand.”

He questioned that securing supplies could be more difficult at a time when the UK market was more dependent on imports because of a failure to pass on margin, so allowing investment.

This is backed up by a recent Savills report, commissioned by the NFU and UK broiler growers, which showed that periods of sustained loss from 2004-2008 led to little investment in the broiler sector, particularly for new chicken housing. “Input costs have risen dramatically over the last five years, while margins have not increased to the same degree.”

Speaking on Monday’s programme (4 May), Norfolk producer Nigel Joice explained how he had invested £5m when he established his poultry unit 11 years ago. “No I wouldn’t [invest heavily in poultry] again with the current margins.”

He said that he currently receives £1.20 a chicken “and it costs very nearly this amount to rear a bird, leaving behind a very small margin.”

When asked how much more producers needed to allow reinvestment, he said it was only a matter of pennies. “1-2p/kg is all we are talking about.”

His other key concern was the expected increase in production costs because of new legislation, such as DEFRA’s Responsibility and Cost Sharing proposals. “The proposed 4p/bird place levy would wipe out any margin and would put me into a loss making situation overnight.”