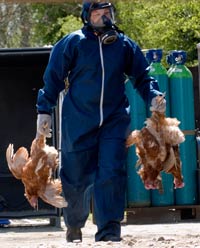 DEFRA’s plans for an independent body to regulate animal health, paid for by the livestock sector, are being opposed by both the UK egg and poultry industries.

The British Egg Industry Council (BEIC) and the British Poultry Council (BPC) have put their names to a joint letter to DEFRA secretary Hilary Benn raising strong objections to the proposal.

“We stand by the livestock sector bodies in our concerns on this, said BEIC chief executive Mark Williams. “In due course we will be putting a full response to DEFRA’s consultation on its Responsibility and Cost Sharing proposals.”

Another co-signatory, the Tenant Farmers Association, predicted the body would be a “wolf in sheep’s clothing”.

“We are well aware that for some time it has been the Government’s intention to pass Exchequer costs for animal health onto the industry. The TFA believes that those organisations supporting the independent body approach are simply providing a false legitimacy to the Government’s plans to charge the industry.”

The joint letter tells Mr Benn: “We wanted you to be in no doubt as to the strength and unity of our concern on this issue.

“While rejecting the independent body approach, we fully support the development of the current framework of core and stakeholder group partnerships and believe this is the most effective and efficient basis for the way ahead.

“The core and stakeholder partnership model has already proved itself to be successful in the handling of disease crises, and in the sharing of responsibility for animal diseases and the cost burdens associated with these.

“The establishment of an arms length body is not the way forward.”