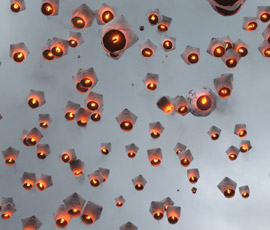 The company said it had decided to stop selling the lanterns following a devastating blaze at a recycling plant in Smethwick, West Midlands.

Sky lanterns were blamed for the fire last Sunday (30 June) which wiped out 100,000t of plastic material and caused £6m of damage.

A spokesman for Poundland confirmed: “We constantly review our buying decisions in accordance to what’s happening around us.

“After hearing the news about the fire in Smethwick we have made a decision to stop selling lanterns to our customers, and recalled all remaining stock from stores.”

“After hearing the news about the fire in Smethwick we have made a decision to stop selling lanterns to our customers, and recalled all remaining stock from stores.”
Poundland spokesman

The NFU and the Women’s Food and Farming Union (WFU) have both campaigned for a ban on the miniature hot air balloons.

Sky lanterns, also known as “Chinese lanterns”, are popular at weddings, parties and social events. But when they come down in fields, they can set fire to crops and farm buildings or kill livestock, farmers have warned.

The NFU has received numerous reports of harm to livestock, and in some instances death, caused by cattle ingesting the metal wires contained withinthe lantern frames.

Lanterns can be chopped up during silage and hay making leading to ingestion at a later date, while the wire can get tangled around the animal’s feet or become embedded in its skin.

The NFU is also concerned about the bamboo frame used in the construction of most lanterns, which are durable and prone to splintering, and continues to monitor potential problems similar to those found with metal wires.

The UK government and Welsh government launched inquiries to assess the risks to livestock posed by sky lanterns.