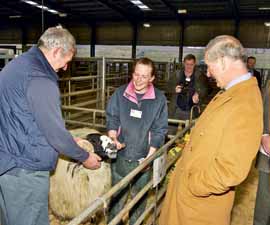 A project to ensure hill farming skills are passed on to future generations has been launched by HRH Prince Charles during a visit to Cumbria, where he met the first seven entrants of the Hill Farm Succession scheme.

With £125,000 worth of funding from the Prince’s Countryside Fund, the scheme will provide each entrant with a two-year hill farming apprenticeship, undertaken on hill farms in the Lake District.

Although incorporating day-release studies leading to a formal qualification, it is the practical learning of traditional hill farming skills and crafts that is the ethos of the scheme.

“Just as this is a region of hefted sheep, so it must also be a region of hefted people. We need to keep young people on hill farms in the Lake District and we need to ensure the skills and knowledge of the current generation of hill farmers are passed on,” said Prince Charles during the launch at Mitchell’s Auction Mart at Cockermouth on Thursday (17 February).

He said he believed hill farming skills could be most effectively taught by farmers on their own farms. “These aren’t skills that can be learnt in a classroom and that’s why I believe the Hill Farm Succession scheme will make sure we maintain the thread of continuity in these hill farming communities.

“If we fail to do this we will lose the links that create this rich tapestry of farming in the upland environment. We must keep farmers farming the landscape and encourage the public to understand the value of the countryside,” said Prince Charles.

But he also acknowledged that the scheme – which is being undertaken in Cumbria by the non-profit farmer-run organisation Farmer Network – would also provide the “mentor” farmers with a valuable resource of additional help via the entrants who will work on the farm as part of their apprenticeship.

Veronica Waller of Farmer Network said the scheme’s trainees would work on four different hill farms during the two-year programme. “We’ve had a very good response from hill farmers who know this is the ideal way to pass on traditional hill farming skills,” said Ms Waller.

The apprenticeship programme provided by Craven College is facilitating the scheme’s formal qualification of a Level 2 Diploma in Livestock Production.

The Prince’s Countryside Fund was set up in July 2010 to provide financial support for schemes in rural areas. So far more than £1m has been raised from 14 founding companies and through donations.

Courses covering fencing, using tractors and livestock husbandry in hill terrain will be undertaken during the two-year apprenticeship, to complement the practical skills learnt throughout the time spent working on farms.

The trainees will spend one day per fortnight away from practical farm work to fulfil formal coursework with Craven College.

Farmers who have joined the project will receive a mentoring fee covering the first year of their involvement, but are responsible for paying the trainee during the two-year apprenticeship.

David Wilson, 21, who lives on his parent’s beef and sheep farm in the Newlands Valley near Keswick, described the apprenticeship scheme as a “great opportunity”.

“It’s a good chance to get plenty of experience on different farms and to finish up with a qualification. I’d like a farm tenancy one day and this level of training will hopefully help me achieve that. I’ve been a self-employed farmworker, but everything is about qualifications these days,” said Mr Wilson.

Sheep farmer John Temple, who runs Herdwicks, Swaledales and Cheviots at Cragg House Farm, Buttermere, said the scheme will bring in “new blood” to hill farming in the Lake District.

“We all know that the average age of farmers is over 50, so this sort of scheme is really worthwhile. Just having someone on the farm full-time will give us the incentive to get things done and pass on skills to a new generation,” said Mr Temple.