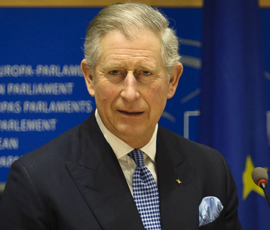 A rural fund set up by Prince Charles is to donate £40,000 to charities which are helping farmers through the financial crisis caused by feed shortages and late single farm payments.

The money, drawn from a special emergency funding stream set aside by The Prince’s Countryside Fund, will be donated to ARC Addington trust and the Farm Crisis Network.

ARC Addington supplies grants to normally viable farm businesses that are in financial hardship due to unexpected circumstances. It will receive £25,000 from the donation.

“Following the poor season for forage production and much higher consumption than budgeted due to harsh weather, applications for grants have risen by 350%,” said a spokeswoman for the Prince of Wales.

The rest of the money – £15,000 – will go to the Farm Crisis Network where case work has doubled as a result of the delay to many farmers single farm payment.

“This delay to a critical part of many farming families’ income has tipped them into financial difficulty and resulting cashflow issues are causing real problems,” the prince’s spokeswoman added.

ARC Addington fund director Ian Bell said the support had come at a critical period for livestock farmers struggling to feed their animals.

“There is nothing more distressing to a stock farmer than not being able to care for animals properly,” Mr Bell said.

Sarah Brown, executive director of the Farm Crisis Network, added that one in four farmers were living on or below the poverty line.

“The delay to payments that keep many producing our food, caring for our livestock and maintaining our natural environment is nothing short of a disaster.

“For some it is like their whole year’s salary being on hold while animals still need feeding, crops still need planting and work still needs doing,” said Ms Brown.

“The resulting increase in FCN casework is extremely challenging so this contribution from The Prince’s Countryside Fund is brilliantly timed and will help farming families who need support getting through a serious crisis.”

Members of the general public who would like to help can make a donation over the counter at The Post Office or via our Text Service. Please text PCF to 70300 and a £3 donation will be made automatically to The Prince’s Countryside Fund.

The Prince’s Countryside Fund was set up in July 2010 by Business in the Community and is the brainchild of The Prince of Wales who has a long-held commitment to supporting Britain’s hard pressed rural areas.