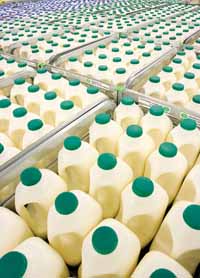 Whole milk powder prices increased by 8.4% for April contracts, and by 9.6% for May-July sales. Overall, the weighted average of all products rose by 5.8% in April, 3.6% further forward, and by 0.5% for the August-October period.

“There is a growing belief among experts that commodity price increases will continue,” said a report by DairyCo Datum. “Looking at the Fonterra auction, prices (particularly for delivery later in 2011) suggest that available supply from Oceania will be tight until well after that new milk season starts in June.”

But despite rising commodity values and soaring input costs, retailers continued to discount liquid milk prices in the UK. Data from Kantar Worldpanel showed that the average retail price of milk in the month to 23 January was 62.5p/litre, 7.1% lower than a year ago. Discounters were undercutting the big five multiples to boost market share, selling liquid milk 27% cheaper on average, DairyCo said.