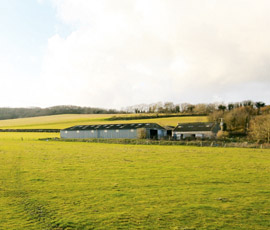 One of the biggest farm business tenancies launched this year is being put out to informal tender from this week.

About 445ha (1,100 acres) of mainly grassland on the Glynde Estate, near Lewes in East Sussex, is being made available as part of a major restructuring project by its owner, Lord Hampden.

The move was encouraged by the availability of two blocks of land totalling 400 acres through retirement and withdrawal. The remaining land, which is subject to several short-term FBTs, will become available over the next two years.

The whole, known as the Great Farm, is being offered as one lot, says Andrew Thomas of Strutt and Parker’s Chichester Office. About 40% of the land could be ploughed, and the unit could support about 300 acres of arable, he added. But beef and sheep would be the mainstay.

“There is some good low-lying land, but there is also some fairly poor land on the South Downs. It makes sense for the two to go together to make one good business.”

Applicants would be judged on the sustainability of their business plan rather than how much rent would be paid for the 10-year FBT.

“Lord Hampden is seeking a long-term tenant and we have been working closely with him to re-establish the farm, moving away from the very fragmented land occupations we have at present.”

A choice of house is offered. Farm buildings are mainly 30 to 40-year-old portal frame structures and there is additional storage.

Single farm payments are available and up to a quarter of the area is likely to be entered into the Higher Levels Stewardship scheme, with payments going to the tenant.

Mr Thomas would not be drawn on probable rent levels. “We have no comparables on this sort of scale in this area. There is some value in the long-term nature of the tenancy and the fact it is something quite unique.

“But there is quite a lot of difficult land. We would rather people looked at the business opportunity and factored in a figure, rather than be guided by expectation of rental value.”

George Dunn, chief executive of the Tenant Farmers Association, welcomed the move and the fact it was on a 10-year FBT. But he was disappointed the farm had not been offered as two holdings to provide an opportunity for tenants moving up from starter farms. “I have not seen the details yet to see how the farm might split, but I do have concerns about the amount of capitalisation involved.