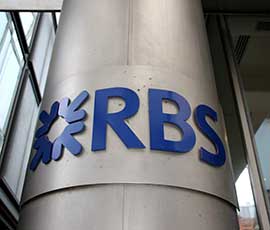 Entrepreneur Lawrence Tomlinson was asked by the government to look into the lending practices of banks to small businesses.

State-backed banks RBS and Lloyds face allegations of “unscrupulous” treatment of their customers.

The dossier, published on Monday (25 November), claims that RBS, which is 80% owned by the taxpayer, put some viable businesses into default so that it could make a profit.

It alleges that the bank’s “turnaround” lending division Global Restructuring Group (GRG), which handles loans considered more “risky”, drove firms to the wall so that the bank could seize their properties.

The report, set up by business secretary Vince Cable, received evidence from small businesses that the GRG division withdrew loans and imposed massive interest rates and fees, running into tens of thousands of pounds.

One business told Mr Tomlinson it paid £256,000 in fees alone, while another said it was forced to pay a sum of £40,000 to continue lending.

In a section titled “Lack of Redress”, the report cites an example of a collapsed farming business.

“Once the family farm has been sold, it cannot be recovered and the business owner feels like a failure despite the fact that this is solely due to a product that had been inappropriately sold to them, as they have lost their children’s inheritance.”

Mr Cable said he was taking them “very seriously”. He has passed on the report to financial regulators the FCA and the Prudential Regulation Authority (PRA).

In a statement, RBS said: “In the boom years leading up to the financial crisis, the overheated property development market became a major threat to the UK economy.

“RBS did more than its fair share to fuel this and commercial property lending was one of the key drivers of our near collapse as valuations rapidly plummeted.

“Facing up to these mistakes has been a difficult, but essential, part of making RBS a safe and strong bank once again. That has been one of GRG’s main tasks.

“GRG successfully turns around most of the businesses it works with, but in all cases is working with customers at a time of significant stress in their lives. Not all businesses that encounter serious financial trouble can be saved.”

A spokesman for Lloyds said: “The specific practices discussed in the report are attributed to another bank and are not a reflection of Lloyds Banking Group’s approach.”

Have your farming businesses been affected by similar issues covered in this story? Email your comments and experiences to philip.case@rbi.co.uk or telephone the newsdesk on 020 8652 4905.