A dose of financial reality 17 years ago has driven a complete overhaul of the Nelless family’s Northumberland stock farm, and is yielding good results.

Why are you not benchmarking?

Most farmers are comfortable making changes to their businesses if they think it will drive improvements in productivity and profitability.

In fact, they do it every day without even thinking about it.

But imagine realising the farm your family has occupied for a century is only profitable because of subsidy support and non-farming income and desperately requires a plan B.

That’s what happened to the Nelless family who now farm 1,400 acres near Longhorsley in Northumberland.

About 17 years ago brothers Duncan and Angus Nelless sat down with parents Henry and Enid – something had to give.

Together they took a long, hard look at the figures and planned an entirely new way of doing things at Thistleyhaugh Farm.

Instrumental to the successful implementation of their new farming system has been keeping a close eye on the detail, including using the AHDB’s Farmbench platform to provide a solid set of numbers upon which the farm has been able to record gradual improvements.

An opportunity to buy

Duncan and Angus are the fourth generation at the farm which the family occupied as tenants for 100 years before the opportunity to buy came along in 1996.

They expanded the acreage by buying neighbouring farmland in 2004 and, two years ago, bought Healey Farm nearby to bring the total owned acreage up to 1,000 acres.

A number of farm business tenancies increase the total farmed area to 1,400 acres which is put to a 2,000-stong flock of pedigree Lleyns, Angus suckler cattle, a pig finishing unit and poultry enterprise.

In 2005 the pair began the two-year conversion process to organic and are now able to supply Waitrose through Dovecote Park.

The business today looks very different to how it did in 2002.

Angus said: “We had a North of England Mule flock and continental cattle which we were trying to breed show calves from.

“We had success, including breeding one which won the Scottish Winter Fair – but in 2002 it became pretty evident that we weren’t making any money.

“We had bought the farm, BSE had hit and there were a few other things working against us which just made us think we needed to do things differently.

“We probably didn’t need Farmbench to show us we were losing money but it allowed us to drill down into the detail of where we were and what improvements we could make.”

A change in approach to producing sheep had already begun in 1997 and was predominantly Duncan’s area of responsibility. 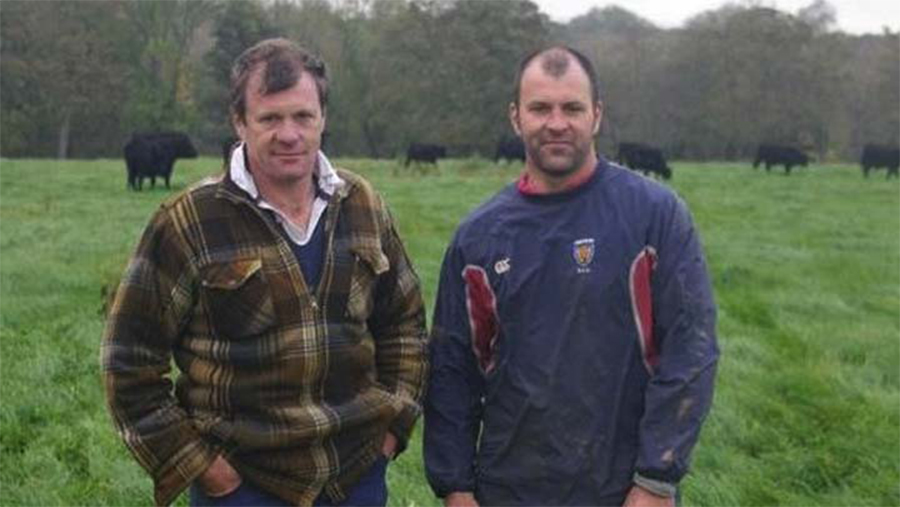 He switched to Lleyns in search of a self-sustaining breed which could produce good replacement stock.

“We started using EID because I was a big believer in performance recording.

“As soon as the opportunity came along we went down the Signet recording line which meant we could closely monitor large numbers without the fixed costs associated with labour.

“The investment in kit and an auto-drafter, for example, is not big when you look at the data you get and the money you’re saving.”

About 75% of the flock can now lamb outside in April, leaving the remaining quarter to lamb inside from the third week of March.

Every decision was centered on driving down costs and increasing profitability, and a similar rationale was applied when it came to deciding on which cattle would be best for the new-look operation.

“Our goal was to have the genetics to get an animal that was fleshy, easy calving, maternal, easy handling and could finish off grass,” Angus said.

“We’ve got very few cows inside now – most are grazing year-round and doing well without the need for grain.”

The brothers don’t like to invest in machinery where possible, instead opting to employ contractors to work the land.

“That’s why we simplified the feeding system,” Angus adds.

“It’s always fixed costs against cows that count. Fixed costs kill suckler cows every time – sometimes it can account for two thirds of the expenditure.”

Angus knows this because he knows his numbers, thanks to Farmbench.

“You could say we run a fairly low-cost system and focus on output and profitability.

“We can always do better and try to pay attention to the detail.”

The brothers say they knew they had to make big changes if the family business was going to thrive in the future.

But the devil was in the detail and they needed to make lots of smaller decisions which would ultimately affect how successful their overarching plan was.

Duncan said: “We had to focus the mind on the factors we could take control of.

“We didn’t know what was going to happen from one year to the next – we still don’t – but you need to get a grip on what you can.

“You don’t know until you put it onto paper. We used to think we had a good idea of our numbers but many people will be like we were; doing a good job but without knowing our true cost of production.”

He says the actual process of benchmarking has been important in understanding costs better but comparing them with other farmers is also a huge benefit.

“We are part of a group of farmers that all benchmark and are comfortable with sharing results.

“We are all different – we all have sheep, but some have more arable ground and others don’t have sucklers. Not all are organic, but that doesn’t matter. What we are all striving for is profitability.

“Yes we see how each other is performing, but all we want to achieve is to take steps forward from where we are to make progress every year. That’s the most important thing.”

Despite the fact that the brothers place a huge amount of importance on data and performance recording, they admit they are not the most technically-minded farmers.

Angus added: “There’s no point pretending that Benchmarking is really simple – it will take time at the start to get used to it but the support it there for you if you need it.

“We see it as time well spent.”

He points out that levy-payers are already paying for the service, so why not use it?

“At some point you have to look at your business and understand how it is performing and with all the uncertainty around agriculture at the moment there is no better time to do that than now.