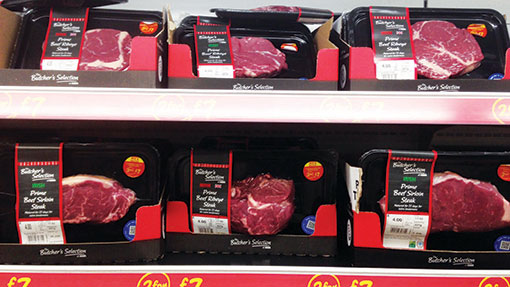 Retailers have been accused of confusing shoppers over the origin of beef for sale on their shelves.

Farm leaders have complained supermarkets are still stocking cheaper Irish beef and continue to use packaging and advertising that makes it difficult to distinguish where the beef is produced.

Spotchecks at three of Britain’s biggest retail chains – Tesco, Sainsbury’s and Asda – have revealed they are selling a mixture of British and Irish beef. In some cases, it is being marketed in stores using the Union Jack but not the Irish tricolour. And it is unclear what proportion of the beef is British and what proportion is Irish.

Farmers Weekly visited a number of their stores and found:

Farm leaders said the situation showed supermarkets were still not keeping pledges to support the British beef industry in the wake of last year’s horsemeat scandal. Tesco, Asda and Sainsbury’s were all criticised for not stocking 100% fresh British beef – in contrast to the other big grocers.

Ms Batters said: “If supermarkets are going to buy out of Ireland then they should not put the Union Jack over Irish beef. If you are going to ‘shaft’ British beef on the shelf, you will not have stability in the industry.”

Farmers For Action chairman David Handley said the group was planning a protest at a major meat processor or supermarket because “action had to be taken”.

“We’ve got to tackle this head-on. I don’t want to see the beef sector in the same position the milk sector was in.”

A Sainsbury’s spokeswoman said: “Clearly there will be times where we have got British and Irish beef next to one another on shelf, but we always clearly label the country of origin the pack front.”

Asda said its customers could make an “informed purchasing decision” as packs clearly showed the country of origin and the Red Tractor logo.

A Tesco spokesman said: “All our beef comes from British and Irish farms. It is clearly labelled by origin, but it is merchandised to suit our customers’ preferences, including by cut and price.”

What the law says

There are no specific rules stopping supermarkets mixing up British and foreign beef on shelves. Labelling and any signage must simply be clear and accurate.

Consumer Protection from Unfair Trading Regulations Act 2008 A retailer could be in breach if it uses false or confusing claims or presentations that lead the “average consumer” to take a “transactional decision” they would not have taken otherwise.

European Union Article 2 of Directive 2000/13/EC says the food’s location in store and any labels or advertising should not “mislead the purchaser to a material degree”.

Compulsory Beef Labelling Scheme Labels on pre-packed fresh and frozen beef products must include: a reference number or code; the country where the animal was born; where it was raised; where it was slaughtered; where it was cut; licence numbers of the abattoir and the cutting plant.