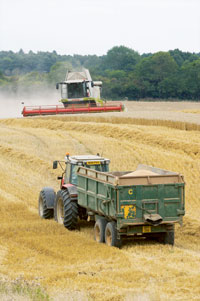 Many contract farming agreementswere set up when today’s sky-high commodity prices were only a pipe dream. When wheat was worth £100/t they worked well, but unless they have been reviewed since, significant divisible surplus windfalls the market is likely to bring may no longer be split fairly.

Strutt & Parker believes such a review should be carried out soon as possible. The grain market shows little sign of weakness over the next couple of seasons. March 2012 wheat futures are worth over £180/t [as of mid May], and November 2012 around £160/t. If the drought worries affecting much of Europe and the US are borne out, values could rise further yet, he points out.

“There could be some rather large profits to split, to the extent where if they are divided on the old 70:30 basis in favour of the contractor the farmer might feel slightly aggrieved,” says Mr Means. “That can also be the case on two-tier agreements where profits above a certain level are split 50:50.”

However, Mr Means urges caution. “If you go too far down this route there will be very little incentive for the contractor to achieve these higher profit levels – for example if the contractor is responsible for selling the grain, once he can sell at a price that moves profits to the top end of tier 2 then he may well lock into that, rather than risking a wait to see if the market moves up.”

It may well pay to review the whole agreement from the bottom up, starting with the farmer’s prior charge and contractor’s basic charge. Levels agreed will then determine how many tiers are needed, and at what profit levels they should be triggered, he explains. The table shows how CFA returns on a 200ha combinable crop farm might have changed over the past three years, and, topically, how the recent drought might hit yields and consequent returns.

“The farmer’s attitude to risk will determine where his prior charge should be set. Wherever markets are now, we know they won’t stay there for ever – volatility is now the watchword.”

A farmer who is risk-averse may well desire a higher prior charge, happy to concede more of the profit later on. “But don’t be tempted to put this too high, based on current prices – if these fall sharply, you may be left with a negative surplus which fall entirely on the shoulders of the farmer. And many contractors will at least want to cover their costs which will limit the farmer’s percentage.”

Given the current market outlook, other farmers may want to go down the potentially more rewarding path of taking on more risk, reducing the prior charge and being rewarded with a greater share of the spoils in the good years, he says.

In practice, figures suggest there is still some work to be done to ensure an equitable share of bigger profits. Over the past three years there has been a slight swing in favour of the farmer among the 25 CFAs managed from Strutt and Parker’s Cambridge office, Mr Means notes.

“An initial review would suggest an increase on the contractor’s basic charge of 5-10% from 2008 to 2011, and 10-15% for the farmer’s retention. However it is not always that easy to measure as agreements have a different set up. Some include the single farm payment, some exclude it, some include ELS and so on. We have also seen a shift on the first tier of profit share more towards the farmer, although the second tier has remained fairly static so far.”

The increase in the contractor’s charge reflects the fact that input prices have been climbing steeply, particularly fuel and steel. This is the simplest way of dealing with the problem, says Mr Means, and the charge may include an element of flexibility to account for volatility.

However, some CFAs include a deal where the contractor carts and stores grain for the farmer. “That’s a real benefit to any farmer, and may have been the reason the contractor won the tender in the first place. But costs have risen sharply since some of these agreements were drawn up, as have potential charges, and contractors really need to draw up an opportunity cost of offering this service. When you sit down and work it out it can come to quite a bit of money.”

Another key element that should be included in a CFA review is impending CAP reform, says Mr Means. “There is no detail yet – we shall know more this summer. But there are two key areas to focus on – active farmer status and single farm payment values.”

Contract farming should not jeopardise active farmer status, provided the agreement is set up correctly. “Agreements that are akin to a tenancy do exist, where the farmer plays little or no part in farming decisions, and /or where his prior charge is set at a level that he is deemed to have taken little, if any risk.

“If you are going to review you may as well be thorough and ensure that everything in the agreement ticks the boxes for you as an active farmer. The farmer needs to be seen as trading – buying inputs and selling crops in the farm’s name is a good idea, as is being party to cropping decisions and grain sales. This is a good idea for Inheritance Tax purposes anyway – as far as the CAP is concerned, we hope it won’t be much of an issue, but it is possible that the rules could be tightened.”

Agreements that include single farm payments and environmental receipts should also be reviewed. “We cannot put figures on this yet, but we need to have enough flexibility to cope so that once the dust has settled on reform and the UK has decided how it will implement the rules, we can mitigate the effects this may have on the profitability and balance of the agreement,” says Mr Means.