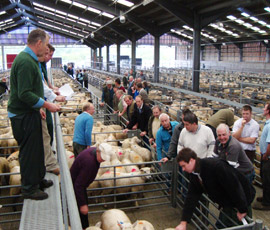 More than 2,720 finished sheep went under the hammer on Tuesday (13 August), pulling trade back to average 179.9p/kg for standard weights. “All buyers are keen for well meated lambs, which is reflected in the top prices, with best sorts in excess of 185p/kg,” said auctioneer Elwyn Davies. A pen of 38kg Texel crosses topped the trade at 197.36p. “Leaner lambs averaged around 160p, reflecting a lower killing out percentage.”

A large entry of 1,013 cull sheep sold to £142 for rams and £90 for first quality ewes, which averaged £75 and £83, respectively, said auctioneer John Rossiter. “Many ewes are being culled due to lack of grazing and weaning of lambs, but trade has held at a good level.”