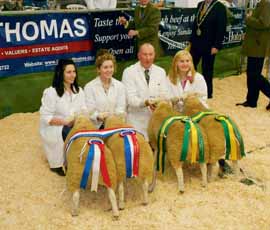 The traditional annual city centre show and sale celebrated its 109th anniversary last week (7 December). Both the sheep and cattle sections made history, with Neil Phillips and family (pictured) winning the supreme champion butchers lambs for the third year running. Their Texels weighed 42.2kg and went on to sell for £210 a head. The same family also scooped the reserve prize, with Texels that sold for £135 at 48.5kg.